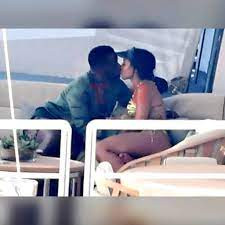 The hip-pop mogul, real name Sean Combs, 51, and the model and social media personality, 32, were photographed sharing a kiss and cuddling on Diddy’s yacht Capri, in Italy this week,

It’s unclear if the model and Diddy are an item. But Diddy arrived in Europe last month with his three daughters Chance, 15, D’Lila, 14, and Jessie James, 14, to attend Dolce & Gabbana’s three-day fashion event in Venice.