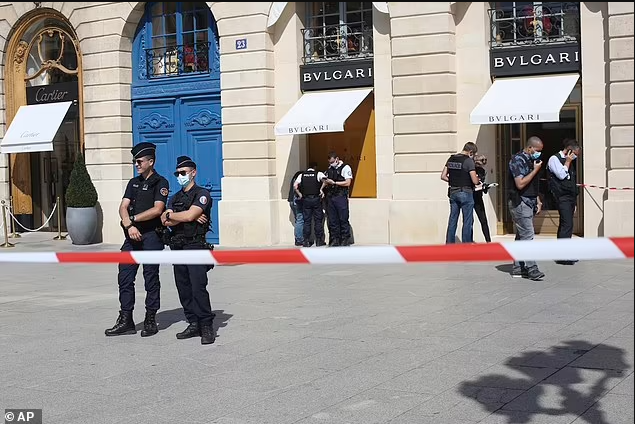 A group of gunmen attacked a Paris Bulgari store on Tuesday September 7, and made way with £8million in jewellery.

Three individuals, wearing sharp suits and armed with guns, robbed the recently revamped boutique on the Place Vendôme in central Paris, where the Ritz hotel is located, shortly before midday on Tuesday, police said.

The three fled in a grey BMW while four accomplices took flight on scooters. Police fired shots at the car near the Les Halles shopping mall, forcing the trio to try to flee on foot.

“Quick reaction by Paris police after a jewellery store robbery at Place Vendôme. Two suspects in custody,” the Paris police said on Twitter. A manhunt was under way for the remaining suspects.

A source close to the inquiry said the thieves grabbed jewels worth €10m from Bulgari, the famed Italian jeweller that is part of the French luxury conglomerate LVMH.

Jewellery stores in Paris have suffered a spate of armed robberies in recent months.

On 27 July, a man stole €2m-worth of jewels from a Chaumet boutique before escaping on an electric scooter. He was arrested the next day with an accomplice, and most of the items were recovered.

Three days later two men armed with an electric shock gun and teargas targeted a Dinh Van store, seizing about €400,000-worth of loot.

The Bulgari store recently underwent extensive renovations and was expanded to open on to the Place Vendôme, as well as being outfitted with marble columns evoking the brand’s origins in Rome.

The historic Place Vendôme is regarded as the heart of French luxury. Labels including Chanel, Boucheron and Van Cleef & Arpels have invested considerably in prestigious stores lining the square.

Chelsea fined £25,000 by FA for failing to control players in draw at Liverpool