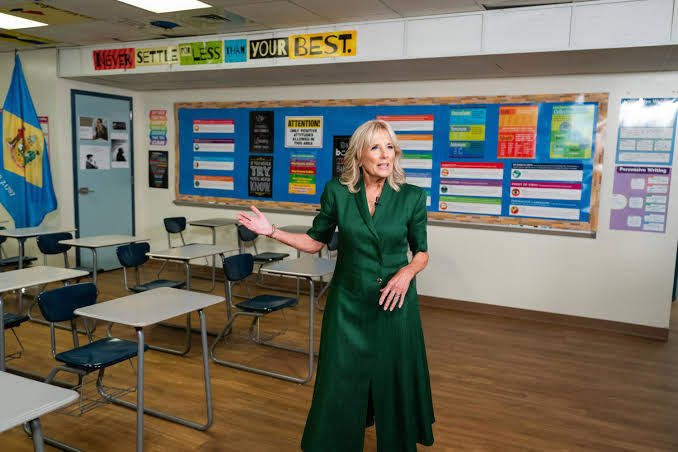 Jill Biden leaves White House to work full-time as a teacher, the first time a US first lady will get a full time job

US First Lady, Jill Biden has returned to the classroom at Northern Virginia Community College, where she has worked since 2009, making it the first time a sitting US first lady will depart the White House, in Washington, DC, for a full-time job.

The White House say she officially resumed on Tuesday, September 7.

‘There are some things you just can’t replace, and I can’t wait to get back in the classroom,’ Biden, 70, told Good Housekeeping magazine in a recent interview.

The first lady has said that teaching ‘isn’t just what I do, it’s who I am’.

Biden taught English and writing remotely for months before returning to the classroom.

She taught at the community college throughout the eight years that her husband Joe Biden served as vice president.

Leaders of the National Education Association, which is the country’s largest teachers’ union, reacting to Biden’s decision said.

‘She sees it up close and personally and now, in the position as first lady, not only does she give voice to that from a place of understanding, she has an opportunity to create a platform and to have influence,’ said the union’s president Becky Pringle.

Laura Bush, the wife of former President George W Bush, was an elementary school teacher and a librarian but stopped working after having children and was not in the workforce when her husband entered the White House.

Former first ladies Michelle Obama and Hillary Clinton were also working mothers but ended their jobs while at the White House.

“Two-thirds of the world is our playground”