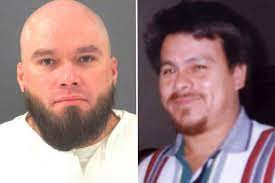 The U.S. Supreme Court has halted the execution of a Texas inmate as they consider his request to have his pastor lay his hands on him as he’s put to death by lethal injection.

John Henry Ramirez, 37, was scheduled to be executed Wednesday night, before the Court handed down their decision at the eleventh hour. 4

Ramirez has been on death row for more than a decade after being convicted of murdering 45-year-old store clerk Pablo Castro in 2004.

He stabbed Castro 29 times for $1.25 during a drug-fueled robbery in Corpus Christi. He fled to Mexico but was arrested more than three years later.

Ramirez, who is a former Marine and devout Protestant, sued prison officials last month, asking them to let his spiritual advisor lay hands on him and say a prayer while he was being executed.

Prison officials claimed that would pose a security risk and the vocal prayer could be disruptive. Ramirez countered that their denial violated his First Amendment right to freedom of religion.

Ramirez’ s request was turned down by Texas prison officials, and a federal judge in Houston and the 5th US Circuit Court of Appeals also denied Ramirez’s request to stay his execution over the issue.

However, the Supreme Court late on Wednesday voted to halt the execution so they can fully consider Ramirez’s request.

According to a memo published Wednesday night, the Court will now hear the case in ‘October or November’.

Ramirez has already had two stays of execution – once in 2017 so he could get a new attorney and again last September because of the COVID-19 pandemic.

Ramirez’s is the latest clash between death row inmates and prison officials in Texas and other states over the presence of spiritual advisers in the death chamber.

He was condemned for the 2004 killing of 46-year-old Pablo Castro as he took out the trash from a Corpus Christi convenience store.

Prosecutors say Ramirez stabbed Castro 29 times during a series of robberies in which the inmate and two women sought money following a three-day drug binge.

Dana Moore, Ramirez’s spiritual advisor since 2016, said the request is about letting the inmate practice his Christian faith and treating him ‘with a certain amount of dignity.’

‘John’s sentence wasn’t death and you can’t have any meaningful contact,’ said Moore, a pastor at Second Baptist Church in Corpus Christi. ‘He is paying for his crime. I guess the question that would come up, is that not enough?’

If you are posting your partner’s picture to ‘pepper’ your ex, make sure he’s not like Prince KpoKpogri -Media personality Ujaligwa