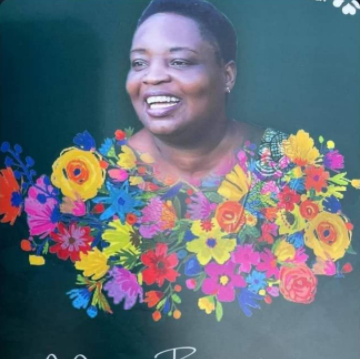 The heartbreaking biography of a woman who suffered multiple tragedies, after her ‘kind’ act towards a cousin backfired, was shared in the program booklet for her obituary.

The woman named Barbara was buried on Friday, September 10, after years of illness.

Barbara was married with two kids and living in the US. She also had a great job as an accountant in an investment company in the US.

However, her ordeal started after the birth of her second child.

Her parents back in Ghana decided to look for someone to assist her in the care of her kids and Barbara’s mother’s cousin, Margaret Ama Owusuwaa, who overheard the conversation “volunteered” to help.

According to Twitter user, Axel, who shared the story, Barbara’s mother, who was a serving Minister in Ghana and belonged to a political party in Ghana, was reluctant but later agreed for her cousin to go to the US on a 6 months visa to help her daughter.

On getting to the US, Ama lived with Barbara but few days before her visa was to expire, as her return to Ghana was drawing close, she allegedly ran to US immigration and “lied” that Barabara had connived with her mother to send her to the US as a slave to serve Barbara.

This led to court cases which ended in Barbara spending 5 years in jail and being deported to Ghana after 5 years and some months in prison.

While serving her prison term, she developed a number of ailments, including a brain tumour and she had to have three open head surgeries.

She eventually died in Ghana. Before her death, the ordeal also caused the death of her mother and her husband also died.

Axel claims Ama didn’t also end well as she and her husband are both blind now and she suffered a stroke that has left her paralysed in the U.S.

Read the story below.