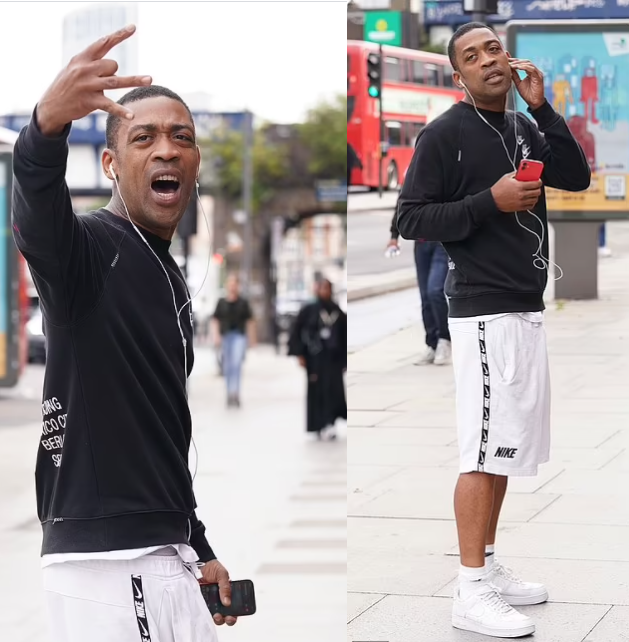 Rapper, Wiley arrives court in style for allegedly breaking into a kickboxer’s flat and attacking him’

British rapper, Wiley arrived in court in style over his assault and burglary case for allegedly breaking into a kickboxer’s flat and attacking him’

During the court hearing, a judge granted the grime artist more time to apply for legal aid.

The rapper, 42, whose real name is Richard Cowie Jr, dressed casually in a black jumper and white Nike shorts as he made his way to London’s Thames Magistrates’ Court on Monday morning.

Cowie Jr, who represented himself during the short proceedings, was told his hearing would be adjourned until September 27 to allow him two weeks to speak to his solicitors and apply for legal aid.

District judge Ross Johnson granted his request for an adjournment and gave him conditional bail ahead of the next hearing at the same court.

Cowie Jr, who has been called the ‘Godfather of Grime’, is accused of breaking into the home of friend and kickboxer Ali Jacko in Forest Gate, east London, on August 28.

The rapper, from Poplar, east London, faces charges of assault by beating and burglary of a dwelling with intent to cause damage.

Mr Jacko, a former world kickboxing champion, had been relaxing at his home with friends when Cowie Jr allegedly broke in, smashed plates and assaulted him.

A friend of Mr Jacko’s reportedly called  the police after the situation escalated before a fight allegedly erupted and Cowie Jr was later arrested.

The Metropolitan Police charged Wiley following the incident on August 28.

In a statement they previously said: ‘At around 2200hrs on Saturday 28 August police were called to a flat in Forest Gate.

‘Officers attended the location. It was alleged that a man had entered the flat, assaulted the occupant and caused criminal damage to property.

‘The man was arrested and taken into custody.

‘The occupant, an adult male, sustained a minor injury. London ambulance service were not required.’