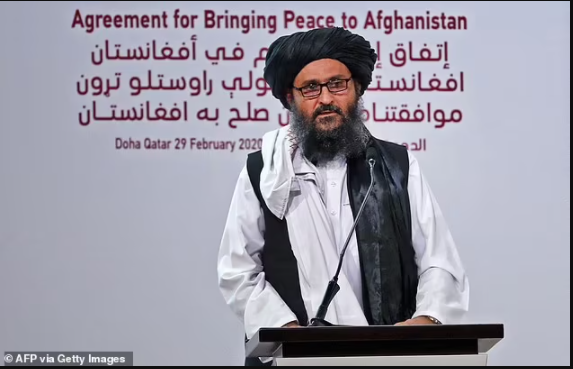 The Taliban has been forced to deny reports that deputy leader Mullah Baradar is dead after rumours emerged that he was killed during a gunfight with his political rivals in presidential palace.

The Taliban insisted today that Baradar is in Kandahar province meeting with the group’s supreme leader Mawlawi Hibatullah Akhundzada to discuss Afghanistan’s future.

But several reports on social media are reporting that he was actually killed in a gun battle in Kabul’s presidential palace on Friday that broke out during a meeting with the powerful and ruthless Haqqani family.

The Taliban has so-far produced a handwritten note and an audio recording as evidence that Baradar is alive, increasing speculation further as video of him speaking wasn’t released.

In it, a man claiming to be Baradar accuses ‘media propagandists’ of spreading false rumours about him – insisting ‘I and all my colleagues are OK’.

‘There had been news in the media about my death,’ Baradar said in the clip.

‘Over the past few nights I have been away on trips. Wherever I am at the moment, we are all fine, all my brothers and friends.

‘Media always publish fake propaganda. Therefore, reject bravely all those lies, and I 100 percent confirm to you there is no issue and we have no problem.’

The recording was posted to Twitter hours after a handwritten note was also circulated, insisted that Baradar is alive.

The note, which was not signed by Baradar but by a deputy, Mawlawi Musa Kaleem, denied there had been a shoot-out at the palace and said Baradar is in Kandahar.

Muhammad Suhail Shaheen, one of the group’s most-senior spokesmen who is based in Kabul, also rubbished the rumours.

‘Reports about Mullah Baradar Akhund being injured or killed are baseless and are not true, I categorically refute them,’ he said.

Rumours about Baradar’s safety began circulating last week when the Taliban announced its new government and named him as deputy prime minister, despite initial reports that he would take the top job.

That led to speculation that he had been demoted due to a clash between Taliban founding members and the Haqqani Network, a powerful faction of the Taliban whose family members secured top positions in the new administration.