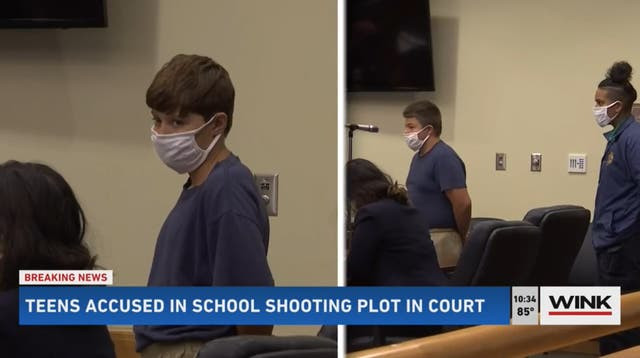 Two Florida teenagers have appeared before a judge accused of planning to carry out a mass school shooting like the 1999 Columbine massacre.

Connor Pruett, 13, and Phillip Byrd, 14, were ordered to be held for 21 days in secure juvenile detention.

The young boys are eighth-grade students at Harns Marsh Middle School in Lehigh Acres, near Fort Myers. They were detained last Thursday after a school resource officer was informed that a student had a gun in his backpack.

When the resource officer approached one of the boys, no weapon was found in his backpack. Surprisingly the deputy allegedly discovered that the boys had spoken to each other during lunch about a school shooting plot. A map of the school was also found that included the locations of surveillance cameras.

Police were notified and detectives found the boys had been researching the Columbine shooting, how to build a pipe bomb and how to buy guns on the black market.

Officers searched their homes and found guns, ammunition and knives.

Lee County Sheriff Carmine Marceno said the two were plotting a school shooting that would mirror that of Columbine in Colorado and Parkland in Florida.

He told a news conference: “This could have been the next Parkland massacre, but we stopped them in the planning stages.”

At the time it was America’s worst-ever mass school shooting.