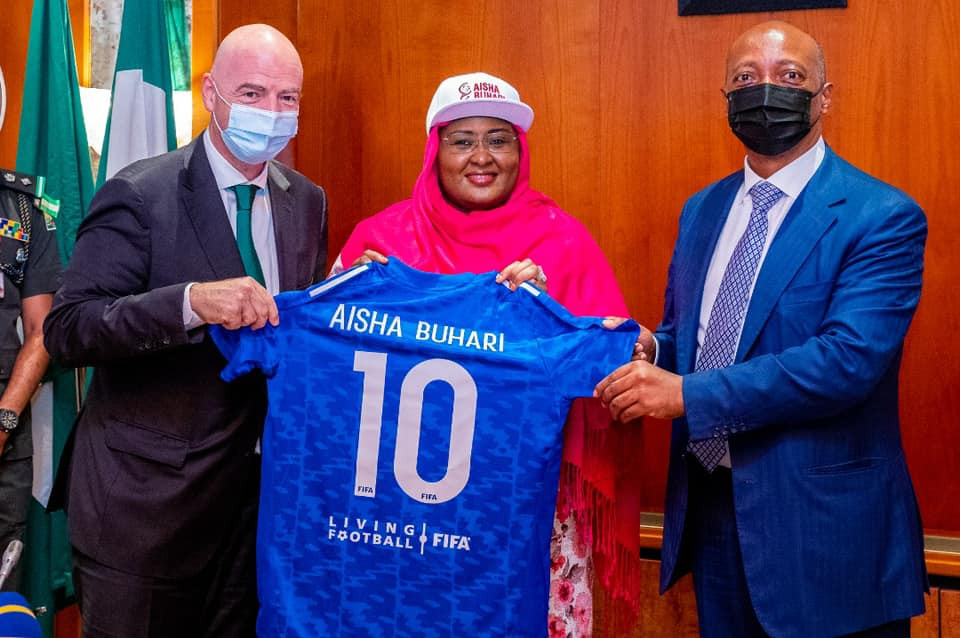 Aisha Buhari charges Nigerian girls to embrace football as she receives No. 10 jersey from FIFA President

She made the call while receiving the President of FIFA, Mr. Gianni Infantino at the State House on Thursday 16th September 2021.

During the visit, the First Lady was presented with a number 10 jersey.

Mrs. Buhari said the benefits of football spreads across the coaches, officials, and administrators on the one side, and to family members and the society on the other.

With football, she said, we have an opportunity to influence and increase positive attitude towards gender equality and development.

“I collaborated with the NFF to promote women football in Nigeria and worldwide through the Aisha Buhari Cup, to build on the gains achieved so far and to create additional opportunities for the girl-child. I, therefore, call on FIFA, CAF, and NFF to show more support and encouragement to female players both at local and international levels” she said.

She commended the President of FIFA for his support to women’s football and his participation at the event.

The meeting was also attended by the wife of the Vice President of Nigeria, Mrs. Dolapo Osinbajo, Honorable Minister of Women Affairs, and that of Sports and Youth Development, Dame Pauline Tallen and Sunday Dare, respectively.

Also in attendance are Mrs Buhari’s two daughters, Zahra and Halima along with their husbands, Ahmed Indimi and Babagana Sheriff.