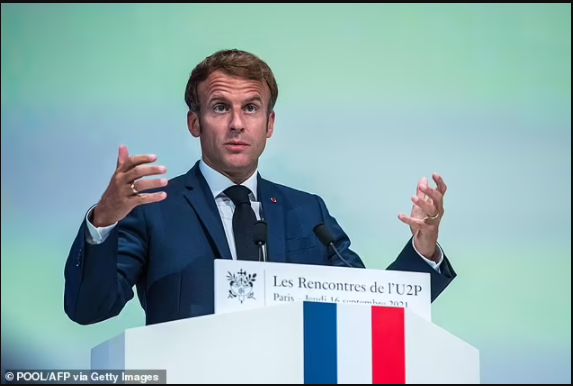 France suspends 3,000 unvaccinated health workers without pay after they refused to be inoculated against Covid

Thousands of health workers in France have been suspended without pay for refusing to take a Covid-19 vaccine ahead of the mandatory vaccination deadline this week, Health Minister Olivier Veran said Thursday.

This comes two days after doctors and health workers staged mass protests against mandatory vaccination measures which they claim is  an attack on their civil liberties.

France’s national public health agency estimated last week that roughly 12 percent of hospital staff and around six percent of doctors in private practices have yet to be vaccinated, leading the ministry to ban 3000 people from their jobs.

President Emmanuel Macron gave staff at hospitals, retirement home workers, and the fire service an ultimatum in July to get at least one shot by September 15 or face unpaid suspension.

‘Some 3,000 suspensions were notified yesterday to employees at health centres and clinics who have not yet been vaccinated,’ Veran told RTL radio.

He added that ‘several dozens’ had turned in their resignations rather than sign up for the jabs.

Despite this, the minister added: ‘We are talking about 2.7 million employees [within France’s national health service]’, before insisting that ‘the continuity of nationwide care has been ensured,’ because ‘a large number of these suspensions are only temporary.’

Veran also said that there were ‘very few white coats’ – a reference to actual medics – among those refusing to be vaccinated, most of whom he declared were ‘support staff’.

The Paris hospital system said on Thursday that 340 workers had been suspended, while local press reports have cited large numbers at hospitals in smaller cities – up to 450 in Nice and 100 in Perpignan among others.