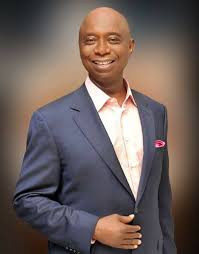 Born on December 21, 1960, into the  Idumuje- Ugboko Royal family in Aniocha North Local Government Area of Delta state , Prince Nwoko attended the University of Keele in Staffordshire, United Kingdom. Here he acquired his Bachelors degree in Law and History.

He then obtained an LLM in Maritime and Commercial Law from King’s College, London. He was subsequently called to the English Bar at Lincoln’s Inn.
Prince Nwoko  later qualified as a Solicitor of the Supreme Court of England and Wales. He then set up his own firm, Ned Nwoko Solicitors and became the Principal Partner and Senior Consultant .

At the zenith of his practice, his organisation had over 30 Lawyers in his employ and  gained international acclaim for its meticulous and tenacious legal battles for financial probity, transparency, management and verification of foreign debts of third world countries and their component states.

The firm was renowned for its legal and consultancy work for several African and Asian governments in interstate and inter government work and relationship in democratic settings are therefore a familiar terrain.

Prince Nwoko and his firm won global acclaim when he took some banks to court in Uk Paris and Geneva in what was a test case on behalf of some states in Nigeria who were said to be indebted to Paris and London Club group of lenders. He initiated discussions with Nigerian government on the need to reconcile and verify our foreign loans that eventually culminated in the exit from the foreign loans. He engaged with the Federal government resulting in the acceptance by the Obasanjo government to reimburse the state governments to the value of 20% in full and final settlement for their claims for refund on the Paris and London Club Debt Buy-Back. Prince Ned Nwoko persuaded reluctant state governments to accept the Federal government offer and pursue the balance subsequently as the law was in their favor. This was what eventually played out as the state governments accepted the informed advice of the incisive counsel.
In 2009, following Nigeria’s exit from the foreign obligations he was engaged in a class action at the Federal High court, Abuja, by all the states in pursuit of their refunds from over deductions. The Federal Government  settled out of court leading to a total refund of over US$10billion to all the states.

His Nigerian firm, Linas International Limited, was equally engaged by the 774 Local Government Areas and following various court judgements in Linas’ favour, the  federal government  has refunded over US$3billion to the Local Government Areas.
Prince Nwoko returned to Nigeria in 1998,  contested and won the election into the  Federal House of Representatives as a member representing Aniocha and Oshimili Federal Constituency of Delta state. He remained a member of the legislative house till 2003.

In 2019, Prince Nwoko contested for the Delta North Senatorial election .
In the complex litigations that followed the election, he won at the High Court but the Appeal and Supreme Courts voided his initial victory.

Beyond his manifest strides in legal practice and politics, Prince Nwoko has interests in aviation, real estate and agriculture.

He is the Chairman of Project Tourism which his company, Linas International Limited launched in collaboration with the Nigerian Tourism Development Corporation, NTDC to project Nigeria’s tourism and cultural endowments through profitable creative projects.

Prince Nwoko is the founder of the proposed first sports university in Africa, STARS, an acronym for Sports, Technology, Arts and Research Sciences. STARS,  with structures now nearing completion,  would in Prince Nwoko’s vision address the critical issue of Nigeria’s  increasing poor performances in international competitions through internationally financed trainings abroad for its sports students and administrators. STARS also  delineates  Prince Nwoko’s yearning and zeal for the education of sports men and those working in the sports arena in Nigeria .

In January,  2020, his Foundation,  Ned Nwoko Foundation,  launched the Malaria Eradication Project, a mision to eliminate malaria in Nigeria  and Africa in general beginning with waste management , sanitation and vaccine development.

To flag off this project , Prince Nwoko made a symbolic, audacious expedition to the Antarctica where he planted the Nigerian flag. He, consequently, became the first black man to visit the South Pole and thus put Nigeria’s name on the global map, a feat that reverberated across the globe.

Prince Nwoko is a passionate and committed philanthropist.  Through his Foundation , he has given scholarships to hundreds of indigent students across the country, sponsoring skill acquisition programmes and youth empowerment initiatives while growing the  economy of the village market women through provision of petty trading funds. His philanthropy cuts across education, tourism, sports , human capital development and agriculture.

For his benevolent financial support for Nigeria’s creative industry, Nollywood,  he was made a Patron of both the Actors Guild of Nigeria , AGN and Association of Movie Producers,  Nigeria, AMP.

The Federal University of Petroleum, Effurun, Delta state, awarded him an Honourary Doctorate degree for his ” uncommon philanthropy, service and integrity “. He also received additional Honourary awards from the University  of Ibadan and the Delta State University for his phenomenal charity.  The Commonwealth University College in Belize  bestowed on him an Honorary Doctorate degree while he was also placed on a pedestal of honour in 2019 as Human Rights Champion of the Decade by Human Rights Writers Association of Nigeria for sponsoring bills that promote human rights including the National Public Funds Recovery and Reward bill that gave birth to the whistle blowing policy in the fight against corruption in Nigeria. These were in addition to several local and international awards bestowed on him for his humanitarian ventures, an untrammelled integrity and a rare passion to touch those on the lower rung of the economic ladder.

Prince Ned Nwoko,  with doubt, is a man in the theatre of time. His political trek is yet unfinished.

France suspends 3,000 unvaccinated health workers without pay after they refused to be inoculated against Covid