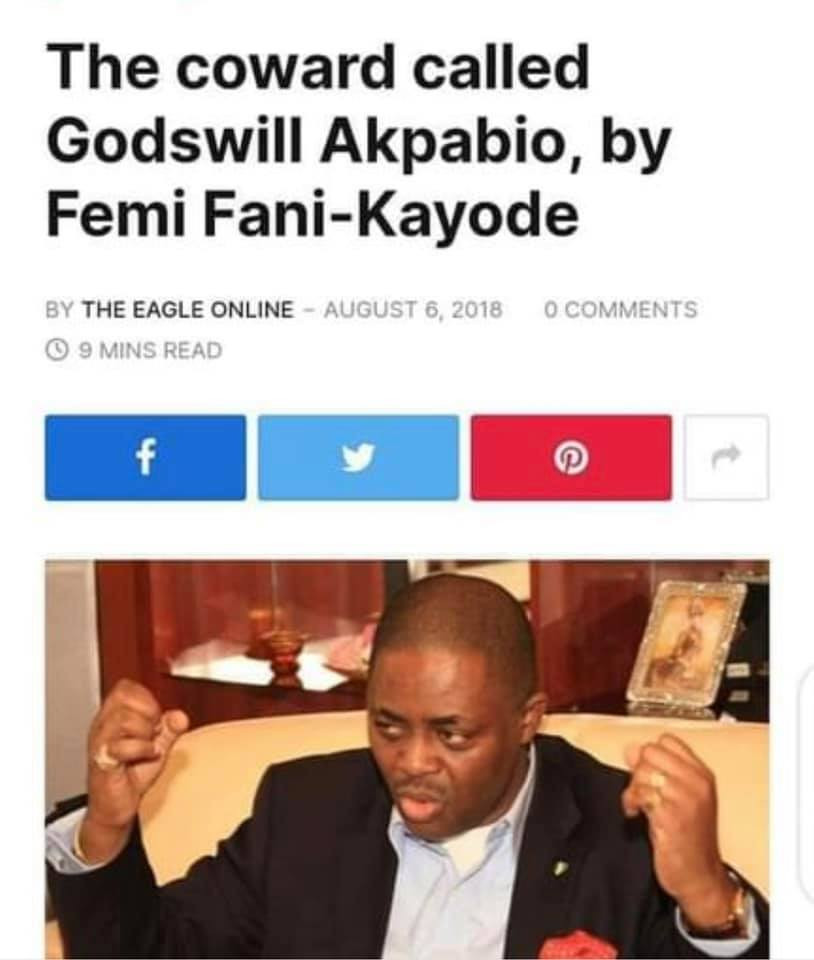 Businesswoman, Blessing Osom has shared screenshot of a piece allegedly written by Chief Femi-Fani-Kayode in which he described former Governor of Akwa Ibom State, Senator Godswill Akpabio as a ‘coward and a traitor’

Osom share the report today, a day after the former Aviation Minister defected to the All Progressives Congress (APC).

“Politicians and their words. So self centred. Now what can you say about yourself???So embarrassing. Welcome to the same APC” she wrote.

The 2018 report, shared by the Eagles Online claims Fani-Kayode had shredded the former governor after he dumped the Peoples Democratic Party (PDP) for the ruling party.  The report stated  that FFK had wriiten;

“Akpabio’s desire to decamp to the All Progressives Congress from the Peoples Democratic Party due to his trepidation and fear of the Economic and Financial Crimes Commission and Buhari’s regime is pitiful. If he has done nothing wrong then why the fear and why the trepidation? Where is his faith in God?”

“And if he has done something wrong, given the fact that he has opposed them virulently for the last three years, does he honestly believe that the Buhari regime will not punish him by using it against him if they manage to get back to power next year, no matter how much he helps them today?

“If he believes that then he is not half as intelligent as I once thought. Buhari is not a man of honour, he is not a worthy ally, he does not keep to his promises and he does not have friends. The only friend he has is his insatiable lust for power which he feeds on a daily basis.

“Aside from that the following questions come to mind. Does Akpabio honestly see any good in Buhari and his government? Is that what he thinks that Nigerians deserve to suffer for the next few years and if so what is their crime?

“Has he forgotten the gratuitous insults that Buhari dishes out so lavishly on the Nigerian people whenever he travels abroad and speaks to foreign leaders and the foreign press?

“Has he forgotten about all those that the Buhari government have killed and all those that have died and suffered in the struggle against them? Does the shedding of innocent blood by a desperate government mean nothing to him?”

“The facility where I was treated for Covid-19 charges 350K per day” Pete Edochie’s son, Uche, says he spent 6 million Naira treating Covid-19 after it damaged 80% of his lungs

Bride-to-be doubtful of covid-19 vaccine, spent her wedding day on a ventilator and will now have her funeral at the church where she was to be married