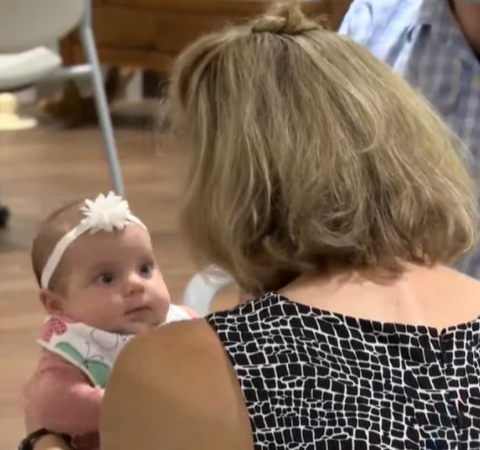 A woman who had a heart attack and was clinically dead for 45 minutes was brought back to life just before her daughter gave birth.

Kathy Patten from Maryland, USA, was playing golf on July 2, when she received a call that her daughter, Stacey Fifer, was in labour.

She hurried to the hospital to be with her daughter for the birth of her 8th grandchild but had a heart attack just as she arrived.

The medical personnel rushed her to the emergency room, where they attempted CPR and administered oxygen, but to no avail.

Patten had no heart rate, pulse, blood pressure, or oxygen to the brain for 45 minutes, which indicated she was clinically dead.

Meanwhile, her daughter, Fifer, had to undergo an emergency C-section following 39 hours of labour, as the baby was stuck in the birth canal.

However, a miracle occurred, as Patten describes it. The medical team was able to resurrect her.

She said: “I’m grateful to God for giving me another opportunity. I’ll simply be the greatest person I can be. Coming back is a second shot at life, and it’s terrifying.”

Fifer then gave birth to Alora saying, “It was just fate that my mum was intended to be here.

“My mum is here because of Alora, and she happened to be in the right place at the right moment. She is nothing short of a walking miracle.”

Dr Dov Frankel, one of Patten’s doctors at Greater Baltimore Medical Centre, was equally astounded and humbled by the encounter:

He said: “I don’t say welcome, I say thank you. You taught us the meaning of life. You showed us what it meant to never give up.”

BBNaija: He wouldn’t see me coming – Pere reacts after Saga betrayed him