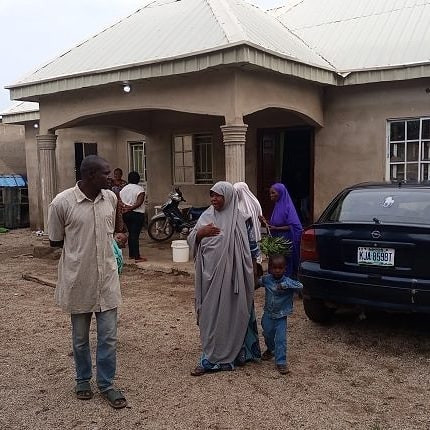 The building of the kidnapped victim

It was gathered that the kidnappers who were about 10 in number invaded the area in the early hours of Friday, September 17, and forced themselves into the building.

Speaking to Nigerian Tribune, one of the neighbours who did not disclose her name said the gunmen broke the main door before gaining entrance into the house and went away with the mother of three whose husband had just been transferred to Kaduna.

“At about 12 midnight, we started hearing sporadic gunshots from different directions around our house. We woke up and thought of having cover. We then heard people jumping the fence trying to gain entrance into the house of our neighbour. They were there from 12 midnight to 1.30 a.m. By the time we came out, they had left with the woman, leaving behind, her three children as you can see.”

Another neighbour, Usman Baba, said  “We just heard the movement of people with motorbikes and thereafter gunshots from different directions, then later towards the house of the woman who was kidnapped.”

A colleague of the husband, Ade Aremu said that “I was called by my colleague who is in Kaduna that his family was in danger, that I should go and see what the situation was. When I got there, I discovered that she had been kidnapped leaving behind, the three kids.”