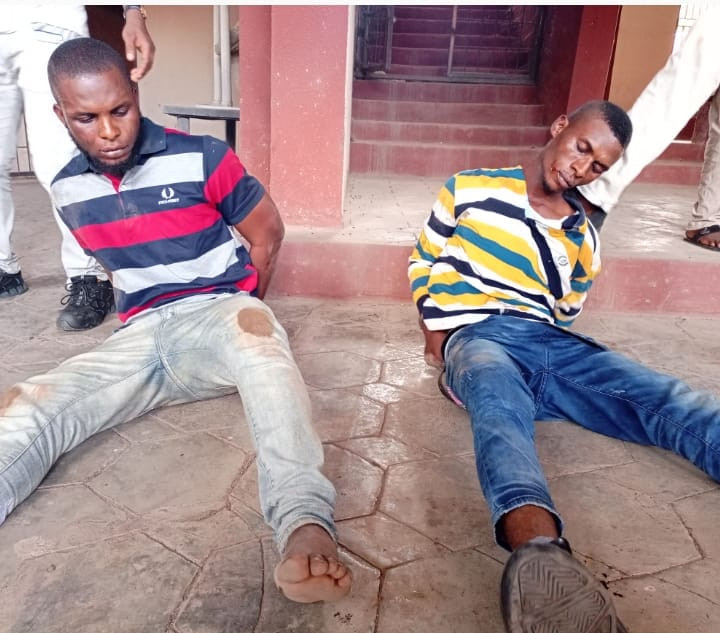 The student was murdered around Oke Agunla area of Ondo, in Ondo West Local Government Area of Ondo State.

The arrest of the two brothers was sequel to the investigation and interrogation of one suspect, Isaiah who confessed that the the duo took part in the killing of the young student.

The brothers were apprehended by a combined team of the Ondo Development Committee Peace & Safety Corps, the Amotekun Corps, the Oodua Peoples Congress (OPC) and the Nigerian Police Force on Wednesday, September 15.

It was gathered that they were traced to a football pitch in Ondo where they took to their heels after sighting the police, Amotekun and other security agents.

A police source disclosed that Isaiah, who was earlier arrested, mentioned them as co-perpetrators of the crime during an investigation by policemen from Enu-owa Division in July this year.

He said Segun and his brother, Azeez, and Isaiah were also involved in the murder of an NCE part three student of Christian Religious Studies (CRS) Owolabi Oladele, at Terere area of New Town in Ondo on 26th July 2021.

“We traced them to the Adeyemi College of Education field around 4:30 p.m., on Wednesday, we mobilised to the scene in conjunction with policemen and men of the Amotekun Corps,” the police source said.

“When they sighted us, they ran into the college and we pursued them and they were apprehended without any casualty. The two brothers are from the same father and mother. The suspects have been transferred to the Anti-cultism Department of the Police Command in Akure for further investigation.”

He said the two brothers and their accomplice would be paraded in Akure and charged to court soon.

BE KIND To The Poor – Davido Preaches

CBN declares founder of AbokiFX, Oniwinde Adedotun, wanted and CBN Governor, Emefiele, challenges those who have a problem with it to come and fight him (video)