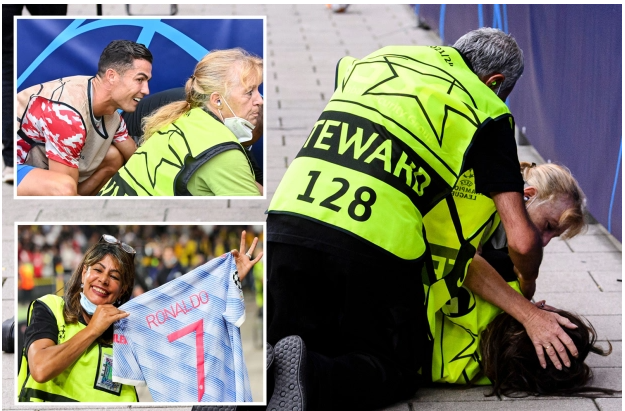 When I saw him, my headache was gone

The female steward hit by Cristiano Ronaldo’s shot on Tuesday thought she had  died when it hit her.

Marisa Nobile was hit by Ronaldo’s shot ahead of United’s Champions League 2 – 1 defeat at Young Boys. The steward was sent flying after a miskick from Ronaldo flew right into her.with medics rushing to her aid.

Ronaldo also charged over to make sure she was alright after the includent. Luckily, Nobile escaped without serious injury but revealed she feared for her life in the immediate aftermath as she lay on the ground.

She told Blick TV: “When the ball hit me on my head it was a full strike.

“I was gone in my head and went to the ground. Afterwards I saw Ronaldo above me and said: ‘Oh my God no, did I die?’

“Ronaldo said: ‘No, no. Excuse me! What’s happening? Are you all right?’

“I was in great pain. My God. I was more or less ballaballa! But then I saw Ronaldo and the headache was gone.”

As well as being apologetic at the time, Ronaldo also gave Nobile his shirt after the 2-1 defeat to cheer her up.

However in a seperate interview with Globo Esporte, Nobile revealed that the pair argued in the past.

She said: “When he played here for Real Madrid, I ended up cursing him. I didn’t know who he was.

“I said: ‘The game is over, you keep running here on the field and people don’t leave.’

“He continued [running on the field], and I was already very tired. He sent me to talk to the coach.

“He told me where to go. I said: ‘What a rude guy.’ Until yesterday, I didn’t like Cristiano Ronaldo.”

Despite their past beef, Nobile admitted she doesn’t think Tuesday’s incident was an act of revenge.

She added: “It wasn’t revenge, no. He was holding my hand, stroking my face, asking, ‘Are you okay, are you okay?’

“Now I’m a number one Ronaldete!”

Boy, 15, gets USB cable stuck inside his pen!s after inserting it there to ‘measure how long it is’