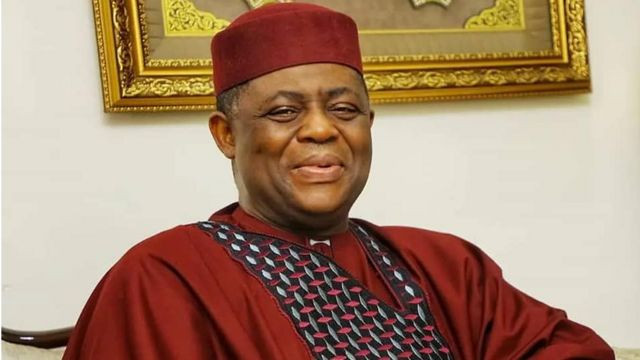 Nigeria’s ruling party, the All Progressives Congress (APC)  has listed conditions former Minister of Aviation, Femi Fani-Kayode, must meet to be fully accepted and integrated into the party.

According to the Director-General of the APC Progressive Governors Forum (PGF), Dr Salihu Moh Lukman, FFK will need to register from his ward, identify with the party chieftains in his state and more importantly demonstrate tolerance and respect for opinions of leaders and members of the party if he is to be fully accepted in the party.

The PGF DG, in a statement he issued in Abuja on Sunday, September 19, also  revealed that party members are angry with the red-carpet reception President Muhammadu Buhari gave to FFK when he decamped from the PDP to APC.

“While it is easy to control people that are already constraint by legal provisions on account of statutory responsibilities such as governors and legislators, individuals like Fani-Kayode, who are only responsible to themselves, would be difficult to manage. It is therefore important that APC members prepare to engage Fani-Kayode to ensure that he is accountable to our leaders, our party organs and by extension, Nigerians.

“A reformed Fani-Kayode should be an accountable personality, both to the party and to Nigerians. On no account should Fani-Kayode ever imagine that he has come to APC to conduct himself uncontrollably. He must be accountable to our leadership and all our party structures.

“There are also issues related to getting him to work with other party members especially in relation to addressing national challenges. The problem of managing Nigeria’s diversity, for instance, require respect and tolerance. That Fani-Kayode has joined APC and has made statements to the effect that he is committed to a united Nigeria must be demonstrated based on respect for all Nigerians irrespective of differences.

“A major test will be the extent to which Fani-Kayode is able to demonstrate tolerance and respect for opinions of leaders and members of the party. This doesn’t mean he shouldn’t disagree. But he must express his disagreement with utmost respect. On no account must he promote divisive campaigns, in whatever forms or manner. Doing so will suggest that he is still the old venomous Fani-Kayode.

“Once that become the case, party members must be ready to engage him including campaigns to discipline him as provided in the constitution of the APC. Therefore, his membership of the party must take root in his Ward in Osun State, and he must subordinate himself to his Ward leadership,” he noted in the statement.

Giving other conditions, he wrote: “For Fani-Kayode to talk of the unity of Nigeria at this time, shortly after he supported and promoted secessionist campaigns of Nnamdi Kanu and Sunday Igboho is a remarkable departure. However, recognising such a departure shouldn’t be interpreted to mean that we should blindly trust Fani-Kayode.

“At this early stage of his membership of APC, beyond the photo show with our dear President Buhari and the Chairman of the APC Caretaker Committee, Fani-Kayode should have a photo gallery with images of him uniting with Chief Bisi Akande, Ogbeni Rauf Aregbesola, Governor Gboyega Oyetola and other party leaders in his home state, Osun. In fact, part of this test would have been met had Governor Oyetola and Ogbeni Aregbesola, at the minimum, been part of the welcome reception at the Presidential Villa last Thursday. Had that happened, the raging controversy following the admission of Fani-Kayode into the party would have been minimised.

“The photo gallery should also cover images with leaders from the South-West. Fani-Kayode should take every step to reciprocate the gesture of our leaders by demonstrating that he is ready to reform himself. Some of the controversy he has already created makes it doubtful whether he want to reform himself at all. For instance, when he claimed that he facilitated the defection of some Governors that joined the APC from PDP, suggests that he is still his old venomous self.

“Only people with very small minds could make such statement and only gullible people can believe them. The claim that three additional Governors – Bauchi, Oyo and Enugu – are on their way to join the APC, also falls in the same category of small mind talking to gullible people. If Fani-Kayode truly want the party to succeed in recruiting anybody, including governors, he should quietly support the leadership. We have a very competent leadership that can handle that responsibility, which is why his admission into the party succeeded in the first place,” he wrote.