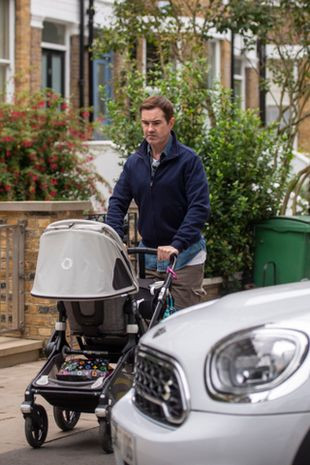 Comedian Jimmy Carr talks about his ‘secret son’, says he hopes wonders of his plastic surgery won’t make his son realize he is older than other dads

48-year-old British comedian, Jimmy Carr has now confirmed that he welcomed a son two years ago.

The Sun reported earlier that the comedian dropped hint of being a parent with his “crude joke” during a stand-up gig at the O2 Academy Brixton in South London few weeks ago.

This has now been confirmed in his new book ‘Before & Laughter’ which will be released on September 30. Carr in his book, reflected on being an ‘older’ dad. He stated that he is conscious of keeping himself in tip-top shape for his son, who he welcomed in his late 40s.

In an excerpt shared by Daily Mail, Carr joked about ageing and how his fondness for plastic surgery will mean that his son “won’t realise” he is “older than the other dads.”

” I take a lot of omega-3 fish oils and I try to eat right and exercise but, let’s face it, I may have forgotten all my wisdom by then and where I left my keys.

“At least I’ll still look the part. Thanks to the wonders of my plastic surgeon, I’m hoping my son won’t realise I’m older than the other dads.

“He’ll come and talk to me about his problems because, unlike the other dads, I’ll never seem shocked or surprised, disappointed or sad, primarily because Botox has robbed me of the ability to move my forehead.

“Just like everyone else you know, I’m going to die, although in my case, large parts of me will not biodegrade. I imagine my teeth will outlive us all.”

Carr also added that any wisdom he has for his mini-me will be from his career as a stand-up comedian.

He further joked about his 2012 tax-dodging scandal, writing;

“It taught me all the skills I needed for life, except for tax accounting.”