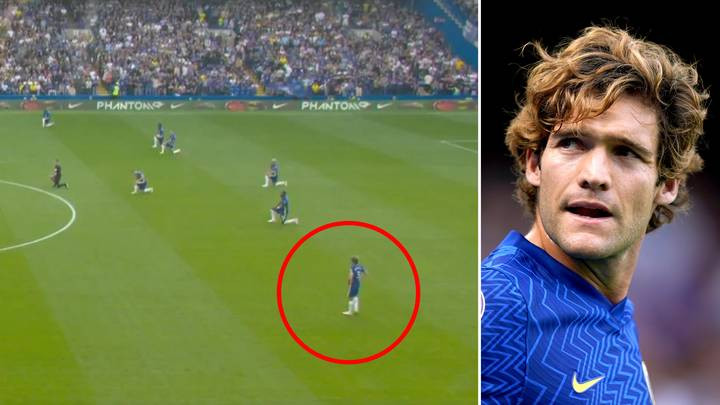 Chelsea defender, Marcos Alonso has has opined that taking the knee is “losing a bit of strength” as an anti-racism gesture, saying he will end the gesture henceforth.

Players and staff across the Premier League have been taking the knee before matches since the 2019-20 seasin in June as a way of showing solidarity towards the Black Lives Matter movement in it’s fight against racism.

But Alonso believes he has found a better way to show that he is “against every type of discrimination” saying “I prefer to put my finger to the badge”.

Alonso told reporters: “I am fully against racism and I’m against every type of discrimination, and I just prefer to put my finger to the badge where it says ‘no to racism’, like they do in some other sports and football in other countries.

“And maybe I think it’s losing a bit of strength the other way, so I just prefer to do it this way and to show I am fully supportive of fighting against racism.”

Asked if he has discussed his decision with the rest of the Chelsea squad, the he replied: “No, we haven’t talked about it.

“We are in the changing room and we are like a family. I have a very good relationship with everyone, I love everyone and up to now we haven’t talked about it. I don’t think there is a need to, but, of course, if I have to speak to anyone, I will say the same thing I just told you and I don’t think there will be any problems.

“For now, I prefer to point to the sleeve and that’s what I will do.”

Remember Crystal Palace winger, Wilfred Zaha was the first man to denounce taking the knee , as he labelled the gesture “degrading”.