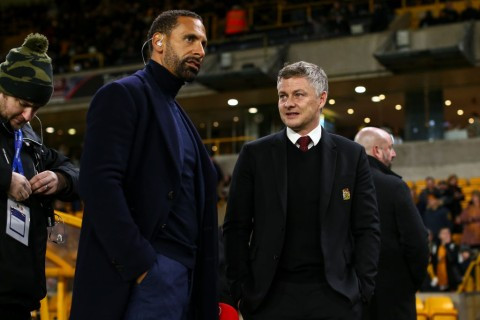 Rio Ferdinand has played down suggestions of rift between himself and Manchester United boss Ole Gunnar Solskjaer over his recent comments on the club’s stars Phil Jones and Cristiano Ronaldo.

Back in August, Solskjaer labelled Ferdinand ‘out of order’ for labelling United defender Phil Jones, a ‘waste of time.’ The former England international was forced to apologised for his statement.

Last week, Ferdinand also angered Solskjaer with comments about Cristiano Ronaldo seemingly shouting instructions on the touchline during the loss at Young Boys.

‘If I’m the manager, I’ve got to be honest, I’m telling him to sit down,’ Ferdinand said on BT Sport, with Solskjaer responding to the comments during last week’s press conference.

‘Rio, again you know, sometimes he comments on things he doesn’t really know,’ Solskjaer then said in his press conference.

Ferdinand has now responded. Speaking on the latest Vibe with FIVE, he dismissed talk of animosity between them.

“Ole’s come for me the other day the paper! He comes for me, I can’t believe it,” he said.

“I’m his biggest fan. Ole’s at the wheel, it wasn’t happening until I said it, bruv!

“But, listen, it’s a phone call. Just call me, say ‘listen, Rio, what’s going on?’. That’s what I would do if it was the other way around.