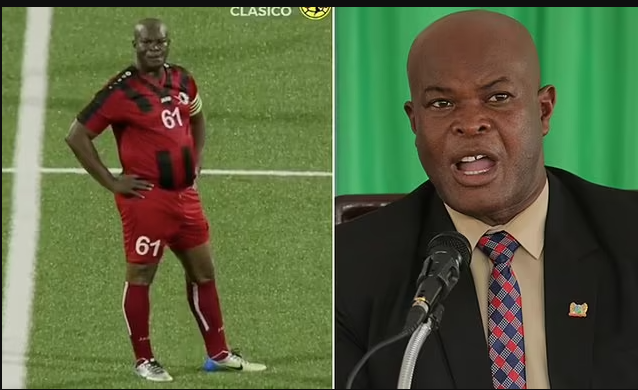 Vice president of Suriname, 60, plays for a team he owns in CONCACAF league fixture but couldn’t stop them from losing 6

Vice president of Suriname, Ronnie Brunswijk selected himself to play for a team he owns in a CONCACAF League fixture and couldn’t stopped them from losing

Brunswijk is the owener of Inter Moengotapoe and is also the club’s president but the politician decided to play a part in their last-16 game against Olimpia on Tuesday night.

Not only did Brunswijk pick himself but he captained his club in the stadium that is named after him. He also played alongside his son Damian up front for 54 minutes of the match but couldn’t stop 6-0 thrashing by Olimpia.

A match report from the game stated that Brunswijk completed 14 of the 17 passes he attempted in his 54 minutes of action. The competition is North America’s equivalent of the Europa League.

For participating in the game at 60 years and 198 days, he became the oldest player to appear in an international club competition.

Watch the video below….

Strengthening your immune system against infections

“Using the phrase “I said what I said,” instead of apologizing, is an embodiment of w*tchcraft” – Actress, Eucharia Anuobi