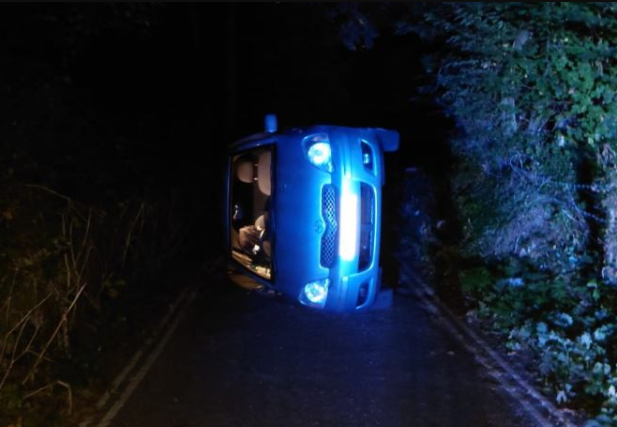 A randy couple have been rescued by the police after their car rolled down the hill and flipped while they were having sex.

The incident occurred after the couple who were in the throes of passion in their tiny Toyota Yaris, knocked the handbrake of their car. It was learnt that they were left in the steamed-up motor after it flipped on its side.

Sharing a photo of the car on social media, Derbyshire Police wrote;

“At an undisclosed location in Derbyshire the couple occupying this Yaris had parked up and were strengthening their relationship.

“Whilst doing so the handbrake has become disengaged and it rolled down a hill before flipping on its side.

“If you use my name to catch cruise, you are on your own”- Janemena wrote hours before Tonto Dikeh alerted her that Prince Kpokpogri allegedly has her ‘sex tapes’

“Kpokpogri has so much of your s*x tapes in his possession,” – Tonto Dikeh tells dancer Jane Mena, as she responds to her ex-lover’s lawsuit against her