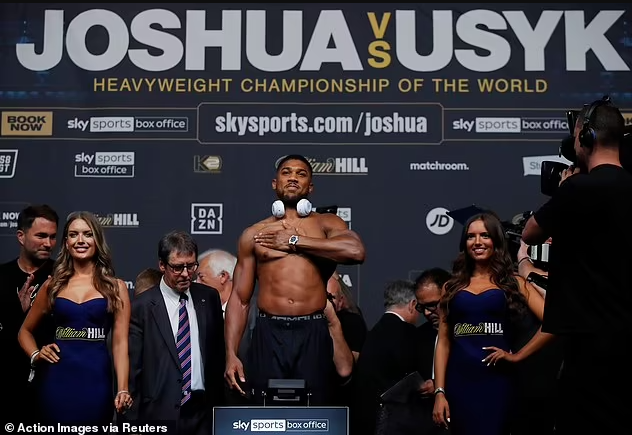 Anthony Joshua has weighed in 19lbs heavier than Oleksandr Usyk ahead of their heavyweight  bout tomorrow night, September 25.

The British-Nigerian boxer came in at 240lbs for the defence of his WBO, IBF and WBO straps, the same weight he carried for his fight against Kubrat Pulev in December.  Usyk, the former undisputed world cruiserweight champion, weighed in at a career high 221.25lbs.

That is an increase on the 199.5lbs from his debut at heavyweight and the 217lbs for his triumph over Derek Chisora.

Speaking to Sky Sports, the Watford-born titan hinted at what his game-plan may entail, and plans to outmuscle Usyk.

‘I can out-box him, of course I can,’ Joshua said. ‘And I can out-strength him.

‘You have to have a bit of aggression, boxing skill, head movement. There is not just one factor that determines a fight.

‘Obviously we have our go-to, our strength. I will use my strengths.

‘But it’s called a boxing match for a reason. I love the sweet science. I will display my boxing skills, but I won’t make it too complicated in there.’

He also insisted that he will attempt to knockout the Ukrainian in the fight.

‘You always aim to prepare for a 12-round fight but hope to cut it short – you aim to knock people out,’ Joshua added.

‘You learn where their strengths are, where their weaknesses are. He has good stamina. So we work around, not just losing weight, but rounds of sparring and rounds on the heavy bag to generate good stamina.

‘We build boxing memory in our muscles so they don’t get fatigued when they are exploding on the opponent’s body and face.’

The fight will take place at the Tottenham Hotspur Stadium on Saturday 25 September.