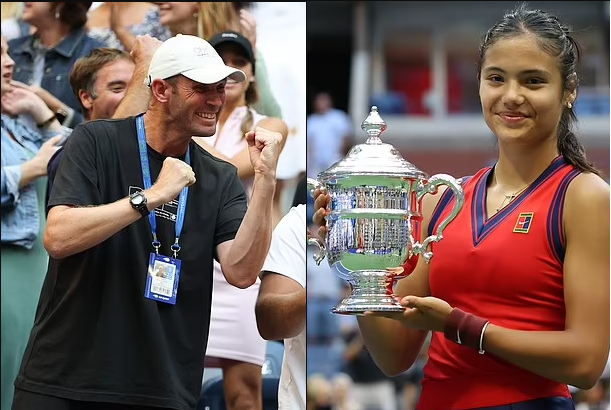 British No 1 Tennis star, Emma Raducanu has split from coach Andrew Richardson just weeks after her US Open triumph as she seek an experienced mentor to help guide her through her next steps on tour.

Richardson previously coached the 18-year-old at Bromley Tennis Centre and was chosen to accompany Raducanu on her US trip because of their familiarity with one another. He was in her corner for her triumph in New York.

Speaking after a homecoming event held by the Lawn Tennis Association at the National Tennis Centre, the teenager said: ‘Where I was at after Wimbledon, I was ranked around 200 in the world and at the time I thought Andrew would be a great coach to trial so we went to the States but never did I even dream of winning the US Open and having the run I did and now I’m ranked 22 in the world, which is pretty crazy to me.’

Raducanu continued: ‘I feel like at this stage in my career, and playing the top players in the world, I realised I really need someone right now that has had that WTA Tour experience at the high levels, which means that I’m looking for someone who has been at that level and knows what it takes.

‘And especially right now because I’m so new to it, I really need someone to guide me who’s already been through that.’

Raducanu added that she does not yet have anyone in mind but Darren Cahill is expected to be her new coach after his split from Simona Halep.

Earlier this month, Raducanu ended Britain’s 44-year wait for a women’s Grand Slam singles champion after beating Leylah Fernandez to win the US Open in a thrilling style .

“These people go through a lot for your entertainment” — Reality star, Tacha berates those criticizing BBNaija housemates (video)