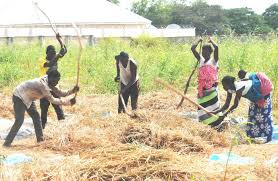 Farmers in Katsina state lament as bandits prevent them from farming

Farmers in Katsina state are lamenting about the activities of bandits which prevent them from going to their farms to cultivate food items.

In an interview with DailyTrust, the farmers say bandits storm their farms to either abduct them, kill them or tax them before they can even cultivate on their farms.

A report by DailyTrust states that every household in Batsarin-Alhaji had to pay N500 to the bandits from the last farming season. Thereafter, the bandits demanded that the villagers supply them with fertilizer. The villagers had to tax themselves to purchase the fertilizer.

Sa’adu Nuhu Batsari, 65, a large-scale farmer told the publication he stopped tilling three of his farms of 20 hectares each for over two years due to insecurity, lamenting that the heightened banditry is driving both big and subsistence farmers out of farming.

“Once you’re on the farm these people would come and abduct, kill or harass you. I abandoned my farms that are deep inside the bush and now work on the one close to town that is only two hectares. The constant threat stopped me from going to the farm”he said

Sani Muslim Batsari, Chairman of Batsari Local Development Association, also lamented that he has been forced to stop cultivating his big farms in the bush in the last two years due to the worsening insecurity situation in Batsari.

“I was harvesting almost 300 bags, but now I harvest only 50 bags or less in my small farm that’s closer to the town.

“Bandits have taken over many forests and cleared them for farming. Some of them can harvest 3,000 bags of grains. Some villagers confided in us that these bandits have hijacked their farms without paying a kobo to them.

“Their activities are taking a toll on our well-being; they have led to shortage of food and skyrocketing prices and lack of menial jobs for your youth as the large-scale farmers that employ hundreds of them have since abandoned the farms.

“President Buhari had, during the onset of the rainy season, assured us that we would go back to our farms this season. Alas, that has remained a mirage! I can categorically tell you that now more than 70 per cent of farmers in Batsari LG have stopped farming,’’ he lamented.

Muhammed Auwal, 55, a farmer in Nahuta village said from the last farming season, farmers in his village were asked to pay tax to bandits to access their farms but that didn’t protect them from attacks by the bandits.

“They’d seize our cattle or motorbikes. This season, they asked our neighbouring village, Kasai, to contribute money and buy fertilizer for them which they did.

Last season, every household in Nahuta had to pay N1,000 and we contributed more than N2 million as tax for the bandits which we delivered to them before they allowed us to farm. But this season, we’re lucky because they didn’t ask for tax from us maybe because soldiers have been deployed to our community. But villages surrounding us are still battling with these insecurity issues.”

“They made ridges and planted crops; their motive is to kidnap me if I went there, so I had to leave the farm to them. I have now relocated to Batsari town and got a small farm close to the town” he said

A farmer who simply identified himself as Salisu, 45, from Tashar Modibbo said he could only cultivate seven out of the 20 acres of his farmland due to insecurity in his village.

“We contributed at least N200,000 to them. Once we fail to pay the tax; they would not allow us to farm and they can still confiscate your motorbike, mobile phone or money. No one can dare say he won’t pay the tax. We don’t inform authorities for fear of consequences,’’ he added