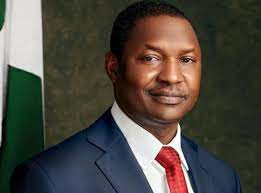 States have no valid claim on VAT collection, it’s on exclusive legislative list

Attorney-General of the Federation and Minister of Justice, Abubakar Malami has said that states in the country do not have any valid claim on Value Added Tax collection.

Malami made the statement in an interview on Channels Television on Friday September 24, amid a faceoff between some states and the Federal Inland Revenue Service on VAT collection.

“A lot has precluded the state from collecting value-added tax. One, generally speaking, as you rightly know, the issue of the value-added tax is an issue on the exclusive legislative list.

“And the implication of being in exclusive legislative list matter is that only the national assembly can legislate on it. The question that you may perhaps wish to address your mind on is whether there exists any national legislation that has conferred the power on the state to collect VAT. And my answer is ‘no’.

“In the absence of a law passed by the national assembly in that direction, no state can have a valid claim to collection of value-added tax.

“Where the national assembly has not passed any law in that regard authorising the state to collect VAT, then it goes without saying that no state can arrogate unto itself the powers to collect VAT.”

The AGF also said that it will be “reckless” for any state to go ahead to collect VAT, despite the court judgement asking parties involved in the case to maintain status quo.

“I don’t see any state perhaps taking the law unto its hands without allowing the judicial process to take its natural course and in breach of the prevailing legislation.

“I don’t see the states acting arbitrarily and setting a very bad precedence as far as governance is concerned with particular regard to the fact that the matter is receiving judicial determination.

“I can’t understand. I can’t perhaps bring that thought into consideration that I believe it could amount to a high level of recklessness on the part of any state government to be operating in breach and to be operating a lawless governance style as far as the Nigerian state is concerned.”

Singer, Lyta shares a photo with his son days after reuniting with him