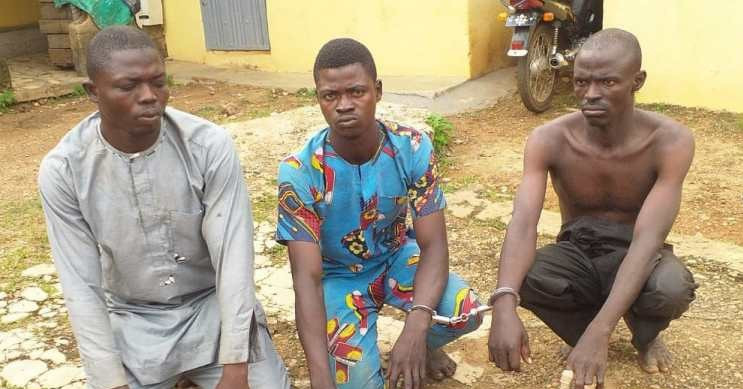 The Kwara State Command of the Nigeria Security and Civil Defence Corps (NSCDC), has arrested one lsmail Saliu, 25, for allegedly conniving with a herbalist and one other, to slaughter his 14-year-old brother, Azeez Saliu, for money ritual.

Spokesperson of the NSCDC in Kwara, Babawale Afolabi, who disclosed this in a statement on Saturday, September 25, in Ilorin stated that the incident happened in Kosubosu, in Baruten local government area of the state.

“On Friday 13/09/2021, operatives of the NSCDC in Kosubosu divisional office got a distress call from a neighborhood about suspicious movement of certain individuals in their area,” Afolabi stated.

“Some officers in the divisional office with operatives of the Anti-Vandal patrol team in the area swung into action and subsequently arrested a herbalist Ahmed Nkwe, 44, lsmaila Saliu 25, and Saliu Ahmed, 30”.

Investigation by the command disclosed that the suspects had lured the victim to a farm where he was allegedly “gruesomely murdered by his own blood brother, lsmail Saliu.

Luck later ran out of the suspects as they were rounded up by the operatives of the NSCDC on their way back from the farm.

“The prime suspect, who is a brother to the deceased has confessed to having personally beheaded his brother with the help of the herbalist and one other person.” he added.

The statement also said that the state Commandant of the Corps, lskil Makinde, had ordered that the suspects be handed over to the police for further investigations and prosecution.