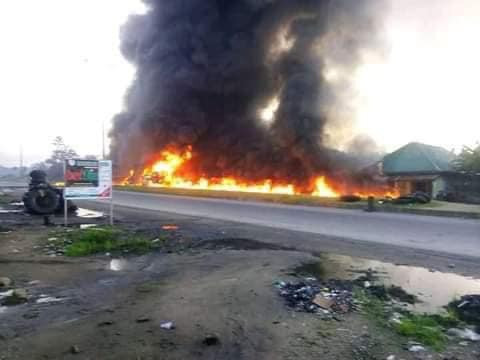 An unspecified number of persons have been burnt to death in an inferno that erupted after two petrol tankers went up in flames in a checkpoint-induced accident at Omurelu community along the Elele-Owerri Road, Ikwere Local Government Area, Rivers today September 28.

The inferno that resulted from the blast was said to have spread in the community, destroying houses, valuable properties and leaving some residents severely injured.

According to reports, the incident happened when one of the tankers conveying the inflammable product was flagged down by a petroleum task force operating in the area.

Eyewitnesses allege that while the task force was trying to ‘inspect’ the tanker driver, another tanker driver on speed lost control and hit the stationary one at the checkpoint

The two tankers fell, spilled their contents, and burst into flames.