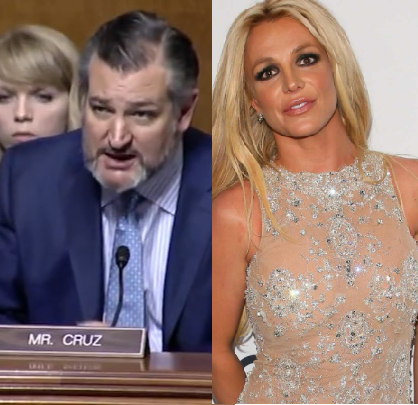 Senator Ted Cruz is backing the call to free Britney Spears from her conservatorship arrangement.

He took the demands of the #FreeBritney movement to Capitol Hill on Tuesday, September 28, saying there are better options than a conservatorship for Britney Spears and others in her situation.

The Senator raised Britney’s case in calling for reform on conservatorship law.

He railed against the fact a grown woman “can’t make basic decisions about her own life.”

Cruz said: “Even though she’s a mother, to this day she can’t make basic decisions about her own life, her own career, her own health or her own finances.”

He added, “It seems that at each critical juncture, the legal system has been designed not for her benefit but to trample on her rights.”

Cruz suggested that instead of conservatorships, he’d like to see, among other things, the ability for someone in Britney’s position to form a support network of people they know and trust and consult this group in the course of making their decisions.

Cruz also reacted to allegations that Britney was forced to get an IUD to prevent her from having a baby, a claim the singer made while testifying back in June.

The Senator said: “That is not somebody else’s choice to make. That is grotesque.”

Man raises alarm over secret recruitment in Benue Revenue Board