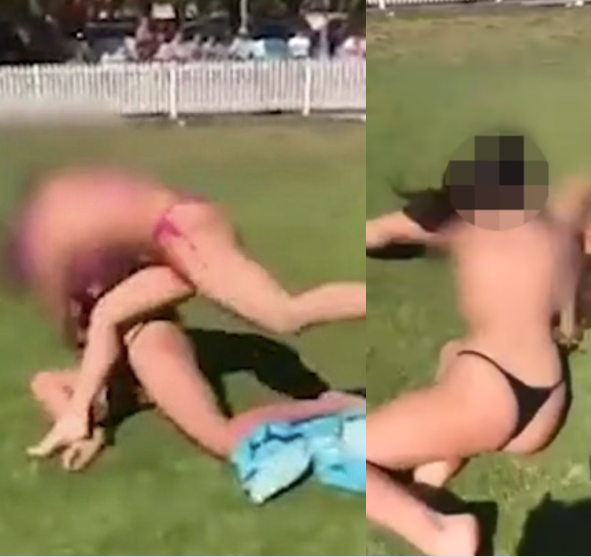 Police are investigating a shocking video showing two teenage girls fighting in a park while a group of men egged them on.

Footage shows a girl in a black bikini standing over and shouting at three other young women sunbathing in a park at Coogee Bay Oval in Sydney, Australia, on Friday, September 24.

The three women kept calm but the woman in black then launched at one of them and started punching her and pulling her hair.

As the violence unfolded, a group of men can be heard encouraging the two girls to hit each other.

The attacker can then be seen dragging one of the women over the grass, losing her bikini top in the process as the victim’s friends try to pull her away.

The attack lasted for nearly a minute and ended with the girl in the black bikini firing one last kick toward the victim’s head.

A New South Wales Police spokesperson said officers were called to the park at around 2.10pm on Friday afternoon following reports that “a teenage girl had assaulted two other girls”.

The footage was taken by a concerned parent who watched the horror unfold.

“She can’t be let to get away with this thinking she can just attack people and not have any consequence, and the young blokes egging her on should also be tracked down and charged with inciting the violence,” the dad told local media.

It is not clear what provoked the attack.

BBNaija besties, Tacha and Khafi allegedly clash, unfollow each other on Instagram