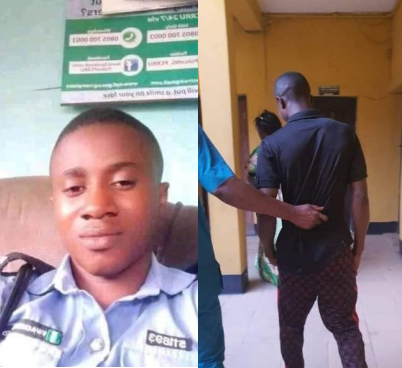 Corporal Chinedu Nwachukwu has been dismissed from the police force after he was accused of raping a female student of the Abia State Polytechnic while she was in detention.

The dismissal of the Police corporal was disclosed after an orderly room trial in Umuahia, where he was found guilty of raping the female polytechnic student.

Nwachukwu is expected to stand trial in a regular court for rape, extortion and other offences.

Recall that it was reported that police officers while passing an off-campus students’ hostel said they could smell “weed” so they raided the lodge and arrested 3 male and 3 female students.

They later released 5 of the students but held the 18-year-old female student and raped her.

She was later hospitalized in critical condition (read here).

The incident sparked a protest by the students demanding an investigation. During the protest, police officers fired shots into the air, dismissing the protesting students.