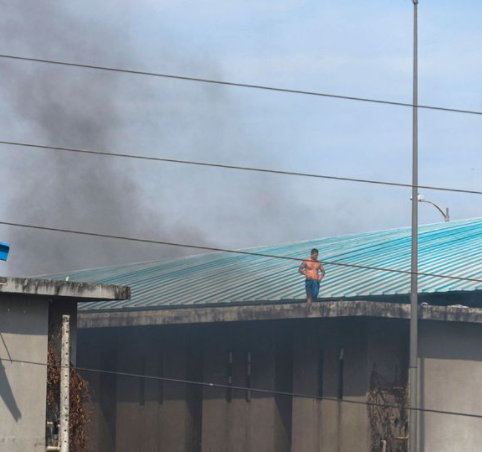 At least 35 people have been killed and 50 more injured after gang warfare sparked a riot in an Ecuadorian prison.

The death toll continues to rise as police check cells. Eight of the inmates killed were beheaded.

The two gangs inside Litoral Penitentiary, Guayaquil, allegedly have links to Mexican drug cartels and were armed with “firearms and explosives”.

Just two weeks ago, the prison service said that the prison was attacked by a drone as part of “a war between international cartels”.

They confirmed on Tuesday morning, September 28, local time that: “An alert was activated for detonations of firearms and explosions in several pavilions, due to clashes between criminal gangs.”

Police said that the gangs were fighting for control of one of the prison’s pavilions well into the afternoon.

Terrifying images taken by those nearby showed inmates on the prison roof wielding shotguns and machetes.

In other videos on Twitter people could be seen desperately fleeing from the bloodshed.

The National Police and Ecuadorian Armed Forces managed to regain control of the prison after a number of gruelling hours, confirmed Pablo Arosemena, the governor of the province of Guayas.

He wrote on Twitter: “I thank the National Police, the Armed Forces, the SNAI staff and all those who made it possible for us to restore order within the prison.

“It was not an easy task, but it is necessary to demonstrate with actions that there is a State here.”

He accompanied his message with footage of the prisoners lying on the ground, hands firmly on their heads after the situation had been neutralised.

According to local news network, Teleamazonas, police are still continuing to check cells where the fighting occurred meaning that the death toll could still rise.

One of the network’s reporters also confirmed on Twitter: “There are 8 beheaded prisoners.”

US government will run out of money by October 18, Treasury secretary says