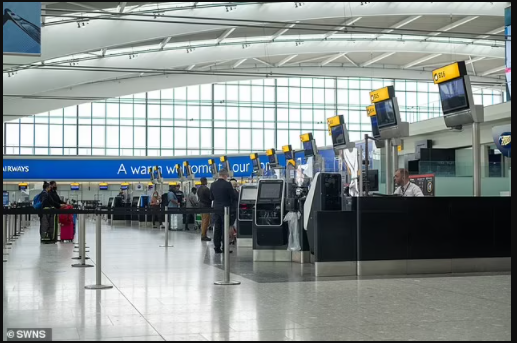 Suspected Islamist extremist, 25, is arrested at Heathrow Airport accused of preparing for acts of terrorism and receiving weapons training

A  suspected Islamist extremist has been arrested at Heathrow Airport on suspicion of terrorism.

The suspect, 25, from High Wycombe in Buckinghamshire, was held on Wednesday for alleged offences linked to Islamist extremism. He is suspected of having committed offences of preparing for acts of terrorism, membership of a banned organisation and receiving weapons training.

The man was arrested following an investigation by officers from Counter Terrorism Policing South East.

It comes after experts warned that Britain is facing its biggest terror threat in years following the collapse of Afghanistan to the Taliban.

Last month, former commander of British troops in Afghanistan Colonel Richard Kemp claimed that the UK faced ‘the greatest danger from terrorism since Islamic State at its height’.

The threat could be bigger than that posed by ISIS and Britain faces an ‘extremely dangerous’ situation, he told Times Radio.

He said the Taliban ‘will allow and probably encourage jihadists to pour into the country from around the world, who plan, meet, prepare, train, organise and carry out strikes against the West from Afghanistan.’

The current threat level, which is determined by the Joint Terrorism Analysis Centre, is ‘substantial’ which means an attack is likely and is the third highest rating.