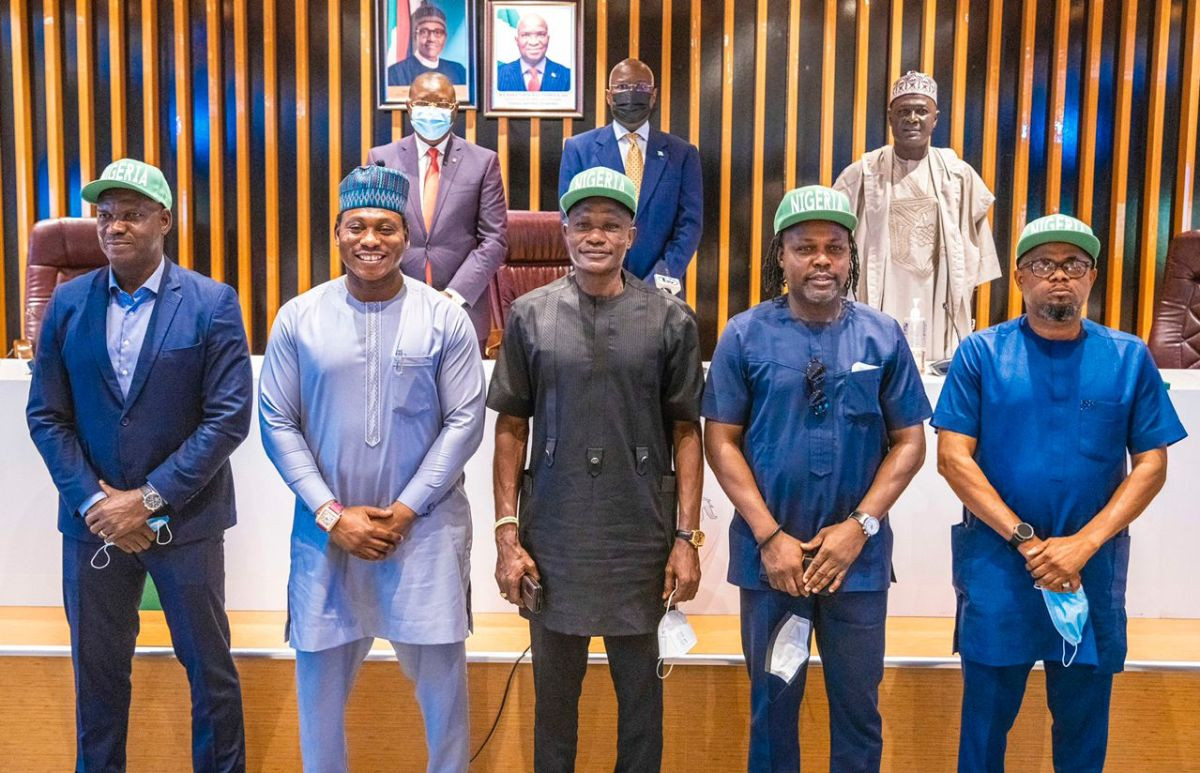 Members of the Super Eagles squad of 1994 that won the Nations cup that year, paid courtesy visits to the Minister of Works and Housing, Mr Babatunde Raji Fashola and the Minister of Youth and Sports Development, Mr Sunday Dare, on Thursday, September 30, in appreciation of the Federal Government’s fulfillment of promises made to them for winning the 1994 Africa Cup of Nations in Tunisia.

In 1994, the Super Eagles made their maiden appearance at the FIFA senior World Cup finals in the United States of America after emerging winners of the Nations cup a few months earlier in Tunisia and the the Sani Abacha led Federal Government promised house rewards for the players and officials of the team including landed properties, a promise that had remained largely unfulfilled until now.

Earlier this year the Buhari led government announcement it will be keeping to those promises.

Represented by the stand in captain of the team Augustine Eguavoen, Alloy Agu, Victor Ikpeba, Benedict Iroha, physical trainer Edema Steven and Daniel Amokachi who is the Special Adviser on Sports to President Buhari, the former players expressed gratitude to the Federal Government for fulfilling the promise after twenty seven years.

“Looking back at the promise made in 1994, which is twenty seven years ago and our reality today we cannot thank President Muhammadu Buhari enough,” Eguavoen opened up during the visit, “we are also grateful to the Honourable Minister of Works and Housing Babatunde Raji Fashola and our boss, the Minister of Youth and Sports Development, Sunday Dare.

“We remember those of our colleagues who are no longer with us like our official captain, Stephen Keshi, Rashidi Yekini, Wilfred Agbonibavre, Uche Okafor and Thompson Oliha and are happy that their children can now benefit from the fathers’ labour.

“This will also send a message to those currently playing that Nigeria will not forget your labours, even if it is late, it will never be denied.”

The Minister of Youth and Sports Development Sunday Dare said he will continue to push the welfare of sports men and women saying the Ministry will make sure a model for continuous reward system will continue.

Minister of Works and Housing Babatunde Raji Fashola,said the reward is confirmation of the will of the present administration never to forget past heroic and patriotic acts.

“Government may be a slow burner and the wheels may turn slowly but it will turn. President Buhari takes the credit for this. He is assuring us all that every patriotic work will be rewarded and all promises made kept. This is not just in the area of sports but across all segments of our national life.” Fashola said.

Female referees must choose between pregnancy or a career