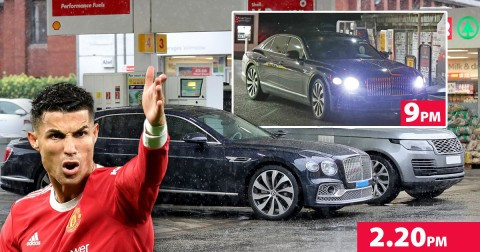 Cristiano Ronaldo’s driver sat for nearly seven hours at a petrol station but had to leave the station without buying a single drop of fuel in the £220,000 Bentley.

Due to the current fuel scarcity going on in the UK at the moment, Ronaldo’s ride was pictured in a Shell forecourt a few miles from the forward’s home but efforts to buy fuel were in vain.

A member of Ronaldo’s security team driving a Range Rover was also parked up alongside the Bentley but efforts to also buy fuel didn’t come to fruition.

According to The Sun UK, drivers of both of Ronaldo’s cats pulled up at 2.20pm on Wednesday, September 29, hoping a tanker would arrive at the filling station, but after six hours and 40 minutes they realised they would have to leave without refueling and drove away at 9pm.

The UK has been facing fuel shortage in the last one week, with even the Army being drafted to help with fuel truck driving to supply fuel.

A source told the newspaper: ‘Even with all Ronaldo’s money, he’s in the same boat as the rest of us.

‘His security waited for hours obviously hoping a tanker would eventually arrive but they were forced to drive off.

‘The two men looked so fed up waiting in the rain. Ronaldo might be housebound like everyone else if this keeps up.’