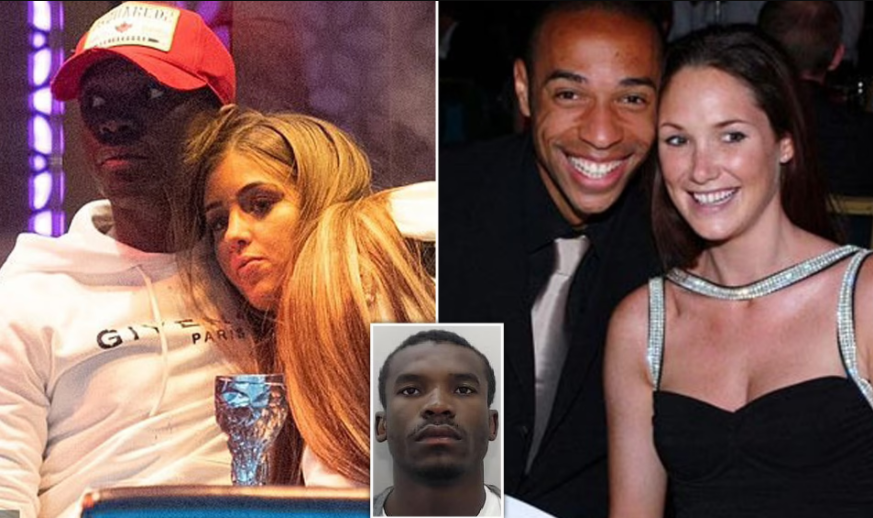 A former footballer who dated Love Island’s Georgia Steel has been jailed after conning Thierry Henry’s model ex-wife in a £160,000 scam after claiming to be a US Navy Seal.

Medi Abalimba, 32, conned Claire Henry out of more than £50,000 earlier this year after raiding her Coutts and HSBC accounts to stay at the Corinthia Hotel in Westminster.

Ms Henry,  also known as Nicole Merry  is the mum of Arsenal legend Thierry Henry’s first child. Their five-year marriage ended in 2008. She was said to have accepted £8m from the Belgium assistant coach following a messy divorce battle.

He appeared at Wood Green Crown Court via video-link from HMP Belmarsh, where he confirmed his name.

“He told her his name was Miguel Johnson and pretended he was a Navy Seal,” Ms Chinner said.

“He told Ms Henry that he had to go to Kuwait on military service and it is thought that he may have been in custody at that time.

“They spoke every day for about four months, and she could hear sounds consistent with a military operation when they spoke on the phone.

“Ms Henry was in a way groomed for what was going to be large sums of money in due course.”

The conman told Ms Henry his family were billionaires and it was “usual” for him to use false names to stay in hotels.

“Claire Henry described him as a charming man,” Ms Chinner said.  “They stayed a couple of nights at a smart hotel in Manchester.

“On the day of check out, he left early in the morning saying he had a meeting in Turkey, leaving Ms Henry to pay the bill.

“After leaving her with that bill he engaged in practices that solidified her belief that he was extremely wealthy.”

The Congolese-born fraudster then checked into Corinthia Hotel in Westminster in January this year under the name Mario Gonzalez.

Ms Chinner said: “On arrival, he had a number of vehicles that arrived with him.

“A Lamborghini, a Porsche and a Bentley, all acquired through deception.”

Abalimba told Ms Henry that he travelled exclusively by private jet, and did not take a passport which he left behind in the US.

He asked Ms Henry to pay for things that he could not purchase without a passport.

“When she would ask for her money back, he would manipulate her into feeling sorry for him,” Ms Chinner said.

“Every time she asked for the money, he would make her feel guilty. Miss Henry told the police that Mr Abalimba’s lifestyle matched extreme wealth as far as she could see, and that his American accent was very good.”

Abalimba also made up a series of stories claiming he had important meetings to attend with the likes of Pippa Middleton.

Ms Henry began to notice money leaving her account and tried to end the relationship with Abalimba, the court heard.

Ms Chinner said: “She challenged him about the amounts being taken from her account.

“He said that his grandfather had died. She described him putting on a full performance of hysteria.”

Bills at the Hotel Corinthia and membership for Al Habtoor Polo Resort in Dubai cost Ms Henry £38,839.11, with the remaining £13,000 being spent by Abalimba on “general expenditure”.

“She (Miss Henry) had genuine feelings of love for this man who she didn’t even know his name as it turned out,” said the prosecutor.

“She was embarrassed to be duped, but she was by no means the only one.

“When Mr Abalimba was at the Corinthia Hotel he got talking to a wealthy businessman called Simon Belofsky, the director of Universal Records.

“He met Mr Abalimba on January 28 this year and believed him to be a rapper.

“Mr Abalimba told him that he had hired out the entire floor (of the hotel) for a whole year at a cost of £13m.

“He also said that his family were Cuban arm dealers. He describes forming a real friendship with Mr Abalimba.”

Mr Belofsky left his wallet with Abalimba after a night of heavy drinking and the fraudster ended up using one of his cards to stay in the five star Rosewood Hotel in central London.

Ms Chinner said: “Mr Abalimba took off the name Belofsky (off the credit card) and substituted his own fake name of Gonzalez.

“It was his own fake name that was used to check into the Rosewood Hotel.

“When he booked in there, he didn’t like the standard room that was offered to him, so he decided to go for the Lincoln Suite.”

In just four days, Abalimba spent £10,000 on Mr Belofsky’s card before his bank became concerned and froze it. He then posed as a wealthy guest to persuade concierge Mark Bilton to spend £104,911.60 at the Rosewood Hotel on his behalf.

“He is, financially at least, the biggest loser,” said the prosecutor. “He is utterly gutted and unable to comprehend how he was able to part with all this money.”

Mr Bilton and his wife were then offered the chance to celebrate with Abalimba after his ‘purchase’ of flats worth £45m in Battersea.

Abalimba even offered a thank you to Mr Bilton, saying that he would organise for Rod Stewart to visit a sick friend in hospital to thank him for his services.

In his statement read to the court Mr Bilton said: “I can honestly say I thought being the victim of fraud and a scam would never happen to me.

“It has taken years to build my business and I have the utmost trust for old and new customers.

“I am still in disbelief that he not only made me a victim of fraud but my family too. He is a thief with no remorse and makes innocent people like myself a victim.”

Abalimba was arrested in March of this year and taken to Holborn police station.

The Derby County midfielder admitted 15 counts of fraud between January 1 and March 1, and confessed to using a forged Illinois driving license and fake debit card in the name ‘M J Gonzalez Business’.

He was sentenced to four years and two months in prison.