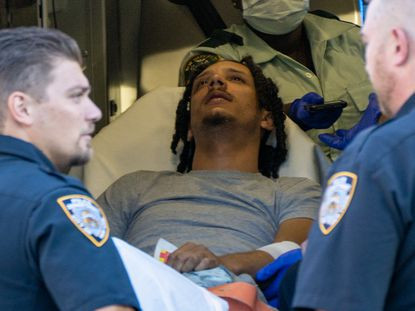 ‘Just shoot me in the head’

An accused drunken driver, arrested while trying to run from a gruesome accident scene that killed his lifelong friend, wished for his own death once police arrived.

“Just shoot me in the head please,” suspect Jovanni Padilla told a police officer after his speeding car ran past a red light and hit another vehicle early Saturday morning, September 25, according to Brooklyn Criminal Court complaint.

The Passenger in the car, Kainen Martin, 23, was ejected on impact, with police arriving to find the dying man unconscious on the street and the driver trying to escape the wreck through a window on the passenger side where his friend was sitting moments earlier.

According to a police report, Padilla  slammed into an oncoming SUV.

Padilla’s vehicle screeched to a halt after careened into a pair of parked cars, with the front of his car destroyed by the impact.

Martin was asleep in the passenger’s seat at the time of the deadly collision when the pair were less than two miles from home after their night out.

The 55-year-old driver of the SUV suffered only minor injuries, as did Padilla, police added.

Padilla, 26, was taken into custody “with bloodshot, watery eyes … unsteady on (his) feet,” with a a police officer chasing him down after arriving at the Brownsville crash and spotting the driver “fleeing the scene on foot,” court documents indicated.

Charges against Padilla, have been upgraded to manslaughter, assault and vehicular manslaughter.

He was initially charged by the policr with driving With Influence and driving his car without a license in the boozy crash that left Martin’s family devastated by the loss of their beloved brother and son.

“You know, he broke down to us and said he blames himself and he wishes it was him instead,” Martin’s sister Elizza, 33, told the Daily News.

Padilla’s lawyer Paul D’Emilia claimed his client’s car was actually hit by another vehicle, although police say an on scene video of the crash contradicts his assertion.

Padilla only learned that his friend was killed during the court appearance on Sunday, the attorney said, adding he had no indication alcohol was involved and insisted his client didn’t run from the scene.

“These kids are lifelong friends, they’re the best of friends,” said D’Emilia. “Both families are distraught. This is a horrible, horrible tragedy … You have two families who are basically destroyed right now. It’s going to take a long time (to heal).”

“It’s unfortunate but we’ll get through this together,” the mother of Padilla told the NY daily News. “Both families. We just need to give them time. ‘Cause there are two victims here.”