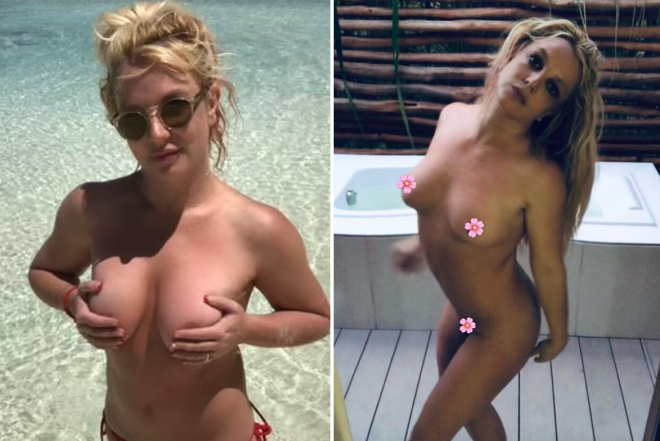 American singer, Britney Spears is seemingly celebrating her conservatorship win with nude photos from her vacation with fiancé Sam Asghari.

The couple had skipped town before Wednesday’s court ruling that suspended the singer’s estranged father, Jamie Spears, from her conservatorship.

Britney shared several photos of her posing in front of a bathtub wearing nothing, except for strategically placed flower emojis. This include images of her on a secluded beach, rocking bright red bikini bottoms and covering her breasts with her hands.

“Playing in the Pacific never hurt anybody !!!!”

27-year-old Asghari also shared photos from their getaway, treating fans to video clips of a boat ride through crystal blue waters along with a plane ride. “Time to celebrate @britneyspears,” he wrote.

Britney had described her conservatorship as “abusive” during a landmark court testimony in June. She also expressed a desire to sue her family and see Jamie charged with conservatorship abuse.

Actress/Nurse, Regina Askia, acquires home in the US (photos)

BBNaija star, Boma and Tega’s husband, Ajeboh, all smiles as they hang out (video)