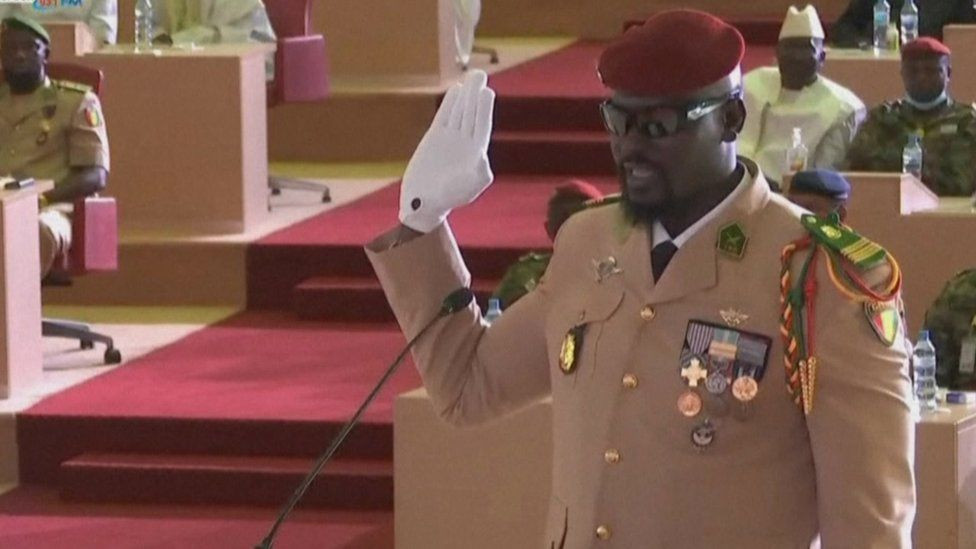 Guinea’s coup leader, Mamady Doumbouya was on Friday October 1 sworn in as the country’s interim president.

Doumbouya who led the overthrow of President Alpha Conde on September 5, was sworn in by the Supreme Court head, Mamadou Sylla, for a transition period of unspecified length. The former French legionnaire, 41, becomes Africa’s second-youngest leader, after Mali’s Assimi Goïta, 38, who also staged a military takeover.

The new interim president spoke of his “commitment” that neither he nor any member of the military government would stand in any future elections that the military has promised to organise after the transition period.

His administration’s mission is to “refound the state” he said, by drafting a new constitution, fighting corruption, reforming the electoral system and then organising “free, credible and transparent” elections.

Doumbouya also promised to “respect all the national and international commitments to which the country has subscribed”.

The new interim President was trained in France and served in the French military. During his 15-year military career, Col Doumbouya served in missions in Afghanistan, Ivory Coast, Djibouti, Central African Republic, and close protection in Israel, Cyprus, the UK, and Guinea.

His swearing-in ceremony was held at the Mohammed-V palace in Conakry on the eve of a public holiday celebrating the 1958 declaration of independence from France.

The September 5 coup, the latest bout of turbulence in one of Africa’s most volatile countries, saw the overthrow of 83-year-old President Conde.

Conde became Guinea’s first democratically elected president in 2010 and was re-elected in 2015. But last year, he pushed through a controversial new constitution that allowed him to run for a third term in October 2020.

Col Doumbouya said the Army had seized power because of rampant corruption, disregard for human rights, and economic mismanagement under 83-year-old former President Condé. The military coup leaders detained Mr. Condé after their takeover, with Col Doumbouya assuring French media he was with them in a “safe place.” His exact whereabouts remain unclear.

Pastor murdered by mob in Kano laid to rest