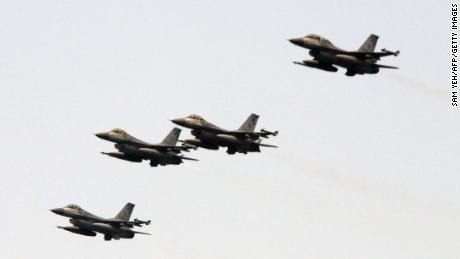 Taiwan says a record number of Chinese warplanes, 77, have entered into its air defense identification zone (ADIZ) for the second day in a row, Taiwan’s Ministry of National Defense said on Saturday night, October 2.

Taiwan and mainland China have been governed separately since the end of a civil war more than seven decades ago, in which the defeated Nationalists fled to Taipei.

However, China views Taiwan as an inseparable part of its territory, even though the Chinese Communist Party has never governed the democratic island of about 24 million people.

Chinese President Xi Jinping has refused to rule out military force to capture Taiwan if necessary.

The island in a statement said a total of 39 Chinese military aircraft entered the ADIZ on Saturday, after 38 planes entered on Friday.

The 38 and 39 planes respectively are the highest number of incursions from China into the Taiwan air territory.

The incursions on Saturday came in two batches, 20 planes during daytime hours and 19 planes at night, the ministry said in two statements. They were made by 26 J-16 fighter jets, 10 Su-30 fighter jets, two Y-8 anti-submarine warning aircraft and one KJ-500 airborne, the Defense Ministry said.

However, the incursions did not violate Taiwan’s airspace, which extends 12 nautical miles from its coast. The US Federal Aviation Administration defines an ADIZ as “a designated area of airspace over land or water within which a country requires the immediate and positive identification, location and air traffic control of aircraft in the interest of the country’s national security.”

Before now, the previous single-day record for Chinese Army flights into Taiwan’s ADIZ was in June, when 28 Chinese military planes entered.

The air incursions came as Beijing celebrated 72 years since the founding of the People’s Republic of China in 1949.

Social media influencer, Brakin Face dies in his sleep 4 days to his birthday

Up to 3,200 pedophiles worked in French Catholic Church since 1950