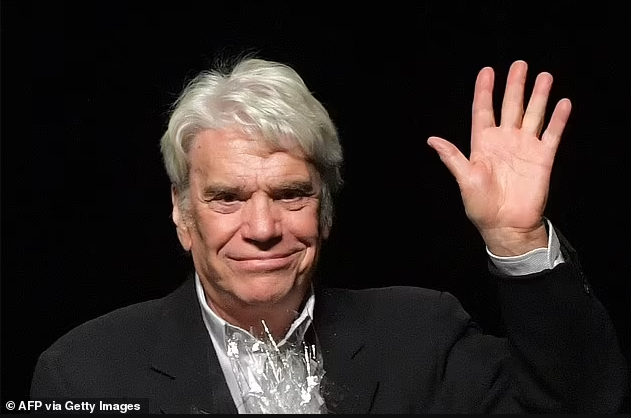 Bernard Tapie, a French mogul and former Olympique de Marseille (OM) president who led the soccer club to the Champions League title in 1993, has died at the age of 78.

The flamboyant tycoon, whose business interests also included a stake in sportswear company Adidas, had been suffering from stomach cancer for several years.

A statement was released on Sunday morning confirming his death.

The statement read: “Dominique Tapie and her children have the infinite sorrow of announcing the death of her husband and of their father, Bernard Tapie, this Sunday, October 3 at 8:40 am, as a result of cancer.”

It adds: “He left peacefully, surrounded by his wife, his children, his grandchildren and his brother, present at his bedside.”

The family said Mr Tapie “expressed his wish to be buried in Marseille, the city of his heart”.

President Emmanuel Macron was one of many to pay tribute to Tapie.

“Praised to the skies by some, dragged through the mud by others, he was as unsettling as he was fascinating, because he straddled every obstacle on his path to success,” Macron said in a statement.

“Olympique de Marseille learned with deep sadness of the passing of Bernard Tapie. He will leave a great void in the hearts of the Marseillais and will forever remain in the legend of the club,” OM said in a statement.

Paris-born Mr Tapie served as a Socialist minister in France while also building up a sports and media empire, and was particularly well known for taking over failing companies in corporate raids, stripping them of their assets and selling them for vast profit.

Tapie made his fortune in the late 70s and 80s by acquiring bankrupt companies, and became one of the richest men in France before becoming personally bankrupt in the 90s.

Among the status symbols he spent millions on was Olympic Marseille where he was a charismatic club president from 1986 to 1994, and La Vie Claire cycling team which won two Tours de France in the 1980s.

On the back of that success, Tapie made his way into politics and was elected to the French parliament in 1989 and again in 1993.

He then became a European Parliament deputy in 1994 after briefly serving as a government minister under President Francois Mitterrand.

He also owned sportswear giant Adidas from 1990-1993, and was largely responsible for turning the company’s fortunes around after Adidas was on the brink of bankruptcy at the start of the decade.

His sale of Adidas signalled the start of years of complex judicial sagas he became embroiled in.

Tapie was at the helm when OM beat AC Milan 1-0 in the final of the Champions League, but was later sent to prison in 1995 for corruption in a match-fixing scandal in the French first division, and also received criminal convictions for tax fraud and misuse of corporate assets after which he was bankrupt.

Following his release from prison in 1997, Tapie was ineligible to run for political office and instead embarked on a showbiz career and tried his hand at acting.

In 2000, he made his debut as a theatre actor and was received widely positive reviews for his portrayal of Randle McMurphy in One Flew Over the Cuckoo’s Nest – a role made famous on the big screen by Jack Nicholson.

Tapie went on to occupy numerous roles in theatre plays from 2001-2005, and also appeared in the well-known French TV series ‘Valence’ as a police chief.

Despite his days as a business tycoon being long gone, the latter stages of Tapie’s life were still wrought with legal battles.

Tapie’s latest fraud trial was adjourned last year because of his cancer, and it was due to resume next May. It related to a marathon legal battle between Tapie and the state-owned Crédit Lyonnais bank, which first arose in the early 90s as a result of the bank’s involvement in the sale of Adidas.

Tapie was diagnosed with stomach cancer in 2017, but his health deteriorated considerably in 2020 before his death this past weekend.

His death came just six months after a burglary at his manor house in Combs-La-Ville, near Paris.

Mr Tapie was badly beaten up, and then electric cords were used to restrain him and his wife, 70-year-old Dominique Tapie.

Watford coach, Xisco Munoz becomes the first manager to be sacked in the Premier League this season