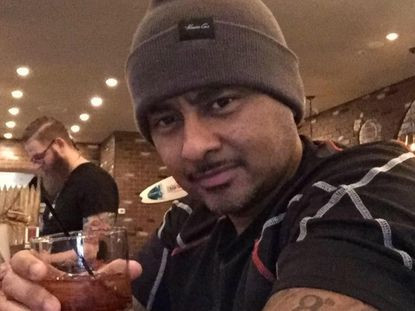 A New York federal jail guard convicted of repeatedly raping an inmate has begged a judge to give him a no-prison sentence .

Carlos Martinez spent five months from 2015 to 2016 ordering prison inmate, who goes by “Maria,” to come to his office in the Metropolitan Detention Center to clean, but when she got there he would violently sexually assault her.

While he raped Maria, Martinez would scan surveillance cameras in his office to make sure that no one could catch him in the act.

Brooklyn federal prosecutors asked the judge in the case, Edward Korman, to sentence Martinez to more than 20 years in prison while the former warden of the jail had previously asked a judge to sentence him to life in prison.

Maria sued Martinez in 2018, along with another lieutenant at the MDC, Eugenio Perez, over the sexual assaults.

Perez was also convicted in 2018 of sexually assaulting Maria — along with three other inmates — and was sentenced to 25 years in prisons.

“Martinez destroyed my soul, he dirtied my life leaving a stain on my body that can never ever be removed,” Maria said in a letter she wrote to the judge.

“God you forgive him because I will never be able to do it, and as I told you before, I only want justice. And even though I cry in my bed, let him cry in prison.”

Martinez has spent the past four years in jail leading up to his trial and now awaits sentencing on Wednesday. He is being held at the Essex County Jail.

His lawyer is now pleading for mercy saying he regrets his actions.

“He failed to exercise sound judgment and made the worst decision of his life,” wrote Carlos Martinez’s lawyer in a sentencing memo filed in Brooklyn Federal Court, adding that the former lieutenant has “regret and remorse” about his criminal conduct toward the detainee.

The encounters with Martinez were so traumatic that on one occasion, Maria considered hitting him over the head with the mop she was using to clean, according to her lawsuit.

Another time, she hit Martinez’s hand when he grabbed at her before one of the assaults in a futile attempt to stop the rape.

“You know how much time you could get for hitting a lieutenant, don’t you?” Martinez asked her before groping her, twisting her arm and forcing himself on her, the suit says.

The lawsuit also alleges that the lieutenant raped another inmate in 1994, 21 years before he attacked Maria.