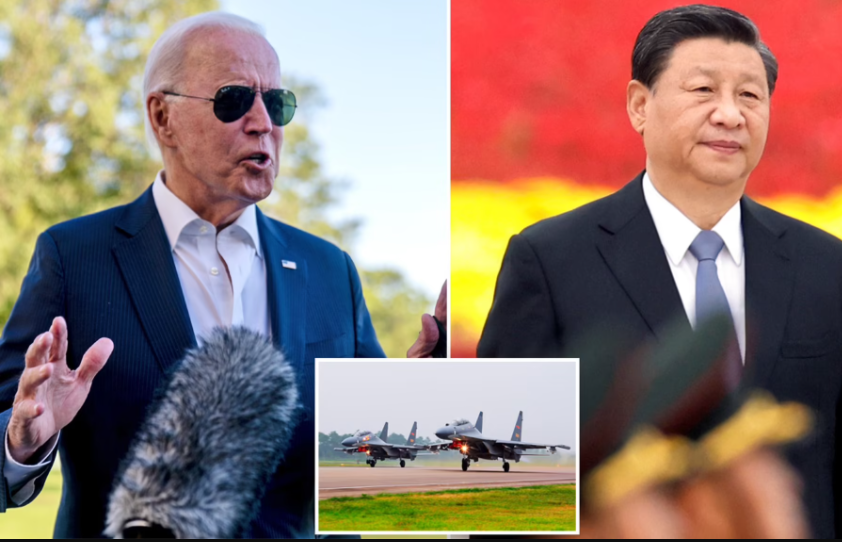 The United States has warned China to stop its ‘provocative’ military flights near Taiwan after they sent about 100 military planes, some of them capable of dropping nuclear bombs, into the island’s air defense zone over the weekend.

They were a mixture of J-16 and Su-30 fighters as well as anti-submarine and early warning aircraft, Taiwan says. Friday’s flights included nuclear-capable H-6 bombers.

‘The United States is very concerned by the People’s Republic of China’s provocative military activity near Taiwan, which is destabilizing, risks miscalculations, and undermines regional peace and stability,’ State Department spokesperson Ned Price said in a statement.

Taiwan is a democratically governed island about 100 miles off the coast of mainland China. The modern island nation was formed in 1949, after the Community Party kicked China’s governing KMT party out of the mainland in the Chinese Civil War.

Taiwan, officially named the Republic of China, is not part of the United Nations. Only 15 countries recognize it as an independent state. The United States and Taiwan have consular relations, and the US government has committed to protecting Taiwan from a Chinese invasion.

China still claims Taiwan as part of the People’s Republic of China and appears to be  prepared to fight for it.

On Sunday, Taiwan’s defense ministry said it sent combat aircraft to warn away the Chinese planes, while missile systems were deployed to monitor them.

The island has complained for more than a year of repeated missions near it by China’s air force.

‘We urge Beijing to cease its military, diplomatic, and economic pressure and coercion against Taiwan,’ Price said Sunday.

‘The United States has an abiding interest in peace and stability across the Taiwan Strait, and will continue to assist Taiwan in maintaining a “sufficient self-defense capability,”‘ Price added.

‘The U.S. commitment to Taiwan is rock solid and contributes to the maintenance of peace and stability across the Taiwan Strait and within the region.’

Taiwan’s Foreign Ministry thanked the United States for its concern, and said China is increasing tension in the Indo-Pacific region.

‘In the face of China’s challenges, our country’s government has always committed itself to improving our self-defense capabilities and resolutely safeguarding Taiwan’s democracy, freedom, peace and prosperity,’ it said.

#BBNaija: Moment Maria apologized to Angel’s father over things she said about his daughter (WATCH)