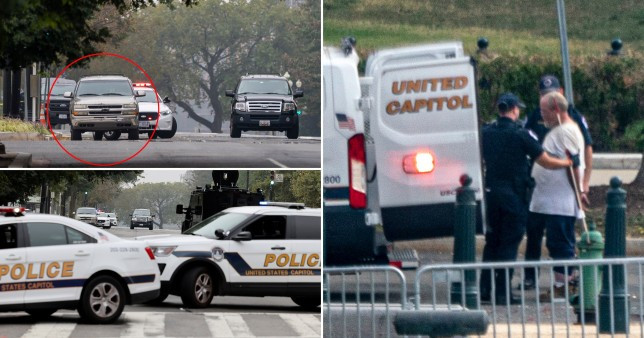 A man who pulled up in his SUV and illegally parked near the US Supreme Court building, has been arrested by the US Capitol Police (USCP).

The man who pushed the US Supreme Court into being placed on lockdown on Tuesday morning has been identified as Dale Paul Melvin, 55, of Kimball, Michigan.

Dramatic video footage shows Capitol Police using flash bangs to force the suspect out of the vehicle before storming the parked SUV and apprehending the driver into custody.

‘We are investigating a suspicious vehicle in front of the Supreme Court along First Street, NE,’ the US Capitol Police (USCP) tweeted at 9.51am ET. ‘Please stay away from the area.’

About an hour later, USCP tweeted, ‘We are still trying to talk to the driver’, and urged the public to continue avoiding the area. At 11am, USCP announced that the man had been arrested.

‘One of our teams just moved in and extracted the man from the SUV. The man is in custody,’ USCP tweeted. ‘Everyone is safe.’

A glance at Melvin’s Facebook page reveals several posts indicating that he is a supporter of former President Donald Trump and a critic of Democrats including former President Barack Obama and former Secretary of State Hillary Clinton.

This seems to be reoccurring event. In September, a man drove a pickup truck onto the sidewalk by the Library of Congress and shouted that he had a bomb. The man, Floyd Ray Roseberry, also told police officers he had a bomb and embarked on an anti-government rant livestreamed on Facebook.

Roseberry in federal court pleaded not guilty to threatening to use a weapon of mass destruction, among other charges.

In April, a man drove into a barricade outside the US Capitol, killing a USCP officer and injuring another. Cops shot the suspect, Noah Green, 25, and he died at a hospital.

In our country you can shoot and kill someone, but you’d better not hurt a gay person’s feelings