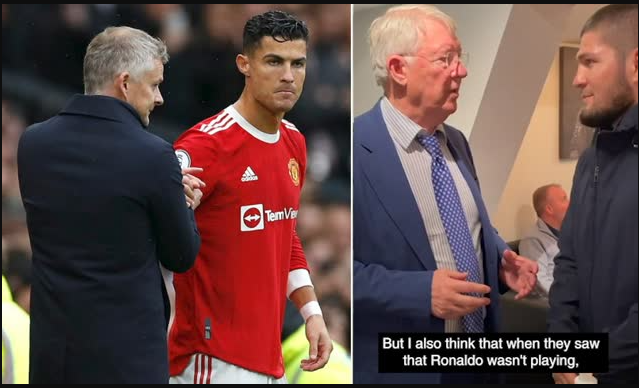 ‘You should always start your best players’

Ronaldo was named as a substitute for last Saturday’s Old Trafford clash and while Solskjaer brought him off the bench after 57 minutes, the Red Devils were held to a 1 – 1 draw.

Solskjaer was criticised for not starting Ronaldo, who has five goals in six games since returning to Old Trafford earlier this year, and former United coach Ferguson has also condemned the tactical decision.

In a video posted on retired MMA star Khabib’s Instagram, Sir Alex was seen speaking to the Dagestani fighter after the Old Trafford match, saying: ‘But I also think that when they (Everton) saw that Ronaldo wasn’t playing, it was a bit…’

Khabib replied: ‘He came on in the second half…’ – but Ferguson dismissed that claim.

The former Manchester United manager responded: ‘I know, but you should always start with your best players.’

After the final whistle, Ronaldo was seen storming down the tunnel in frustration, while Solskjaer defended his call to leave the Portuguese sensation on the bench.

‘You make decisions throughout a long, long season and you’ve got to manage the players’ workload. The decision was, for me, the correct one today,’ said Solskjaer in his post-match press conference.

‘Anthony Martial did well and scored a good goal. Edinson (Cavani) needed minutes and got an hour. We have to make those decisions sometimes.

‘With the result today, I understand they go away disappointed. We have started better than last season but it’s still not what we wanted.’