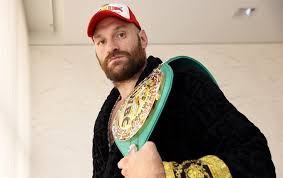 After boxing, I will be a very sad, lonely person

British heavyweight champion, Tyson Fury has revealed he could go into depression when he finally retires from boxing.

Fury is set to take on Deontay Wilder for a third time on October 9, in Las Vegas.

The two heavyweights fought first in 2018, where the result was a draw, and again in 2020, where Fury took home the WBC belt.

Ahead of the fight, Fury discussed his motivations in the sport, and why he fights.

“What motivates me?” he continued. “I’m getting asked this a lot. It’s definitely not a few quid. It’s the fact there’s nothing else.

“I’m boxing because I can – I don’t enjoy anything else, I don’t have any hobbies. After boxing, I will be a very sad, lonely person.

“I’ve tried looking after animals, four-wheeled driving, got a shotgun licence, clay pigeon shooting. Nothing turns me on.”

Fury has been very vocal in the past about his struggles with mental health, and in 2015 almost took his life after falling into depression months after winning all the heavyweight belts from former world champion Wladmir Klitschko.

For the first time in four years, US reveals the number of nuclear weapons in its stockpile