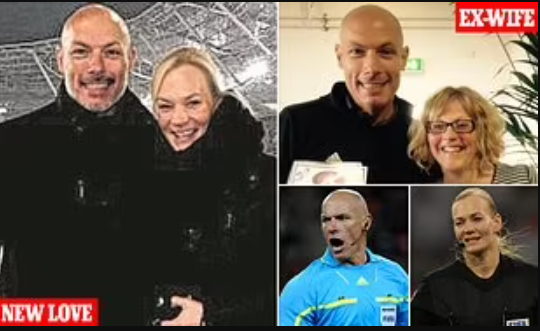 Ex-Premier referee, Howard Webb reveals how he left his ex-wife for female referee Bibi Steinhaus after a dinner date

Howard Webb has revealed how he left his ex-wife after going on a dinner date with female referee, Bibi Steinhaus, who he is now married to.

The former Premier League official tied the knot with Steinhaus in April this year after separating from his ex-wife Kay back in 2016.

The marriage brought together two of football’s most famous referees, who  both officiated World Cup finals. Now the couple have lifted the lid on how their relationship started with a chance dinner during one Sunday evening in late 2015.

The pair had met two years earlier but it wasn’t until Webb found himself in Frankfurt that he then ask the German Steinhaus out for dinner.

Speaking with Futbol with Grant Wahl, Steinhaus said: “To be fair, I would not have made the effort going all the way from Hannover to Frankfurt, which is three and a half hours, to meet (Webb) for dinner.

“Today I would say, ‘What a chance!’ But I have to say, six years ago I would probably not have thought about that.

“Anyway, it ended up that I had a match on Sunday in Frankfurt, totally by chance. And I said, ‘Seven o’clock is fine. I have final whistle at five. I can make that, no problem.”

The dinner turned out to be a success and shortly after Webb told Kay and their three kids he was moving to Germany to live with Steinhaus.

Webb said of his marriage: “Our relationship had changed, but we’re still fine now, and it’s okay. The kids are fine.

“But like any breakup, it’s painful. (My relationship with Steinhaus) didn’t come out in the media (for a year), but Bibi and I weren’t hiding it.”

The dinner in Frankfurt came after Steinhaus had famously taken charge of a match in which she sent off Fortuna Düsseldorf’s Kerem Demirbay. The midfielder was then slapped with a five-game ban after claiming ‘women have no place in men’s football’.

“If your husband leaves his clothes on the floor, it’s OK to throw them in the trash” Lola Omotayo playfully offers marriage advice