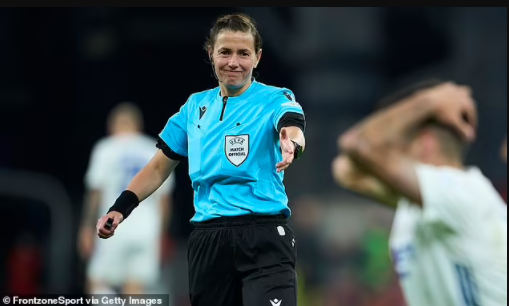 England’s men’s senior side will be refereed by a woman for the first time on Saturday as Ukraine’s Kateryna Monzul will take charge of the World Cup qualifier against Andorra.

Monzul, who has been refereeing in the men’s Ukrainian Premier League since 2016, will be joined by an all-female assistant crew of Maryna Striletska and Svitlana Grushko, also from Ukraine.

Monzul took charge of a men’s senior international in November 2020, alongside an all-female assistant crew, for a Nations League clash between San Marino and Gibraltar.

The 40-year-old has also refereed at Women’s World Cups and European Championships.

The Video Assistant Referee will also be a woman, Stephanie Frappart of France who took charge of the 2019 UEFA Super Cup between Liverpool and Chelsea, for the clash at the Estadi Nacional on Saturday night.

Frappart, 37, made headlines as the first female official in Ligue 1 back in April 2019, before becoming the first woman to officiate in a major men’s European match in the Super Cup clash in Istanbul.

Ghanaian actress, Akuapem Poloo lifts her top during interview to show her cleavage and tummy; says her body remained unchanged after childbirth (Video)