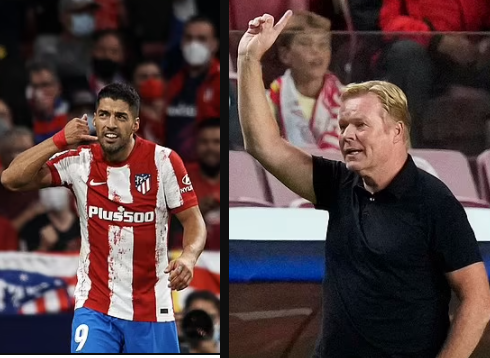 The former Liverpool striker was allowed to join Atletico Madrid in a £5.5million transfer from the Catalan giants last year following a phone call with the then newly-appointed Dutch boss.

The 34-year-old Uruguayan came back to haunt his former club last weekend, scoring the second goal to inflict a first league defeat of the season on Barcelona.

Suarez denied that the phone call gesture after scoring was directed at Koeman, but he has now criticised the 58-year-old publicly, insisting the Dutch coach did not make it clear if it was him or the club who wanted him gone.

‘The Koeman phone call to tell me that he was not counting on me lasted 40 seconds, it is not the way to get rid of a legend,’ Suarez told Gerard Romero’s ‘Jijantes FC’ Twitch channel via MARCA.

‘First he told me that I would not be in his plans and then he told me that if I did not resolve my contract I was going to play (in the first game of the season) against Villarreal.

Suarez also admitted that sealing a move to last season’s Spanish champions was among the most difficult he has experienced as a player.

The ending of his  Barcelona career came at the same time as close friend Lionel Messi’s transfer request to leave the club. The Argentine ended up staying another season before moving to Paris Saint-Germain in the summer on a free transfer.

‘They were very difficult days because of everything I gave to the club. I spoke with Sofía (his wife) and Leo after the call,’ Suarez added.