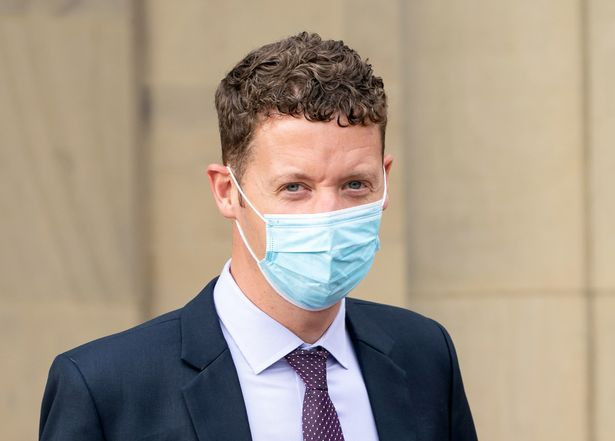 Police officer accused of raping woman after finding out his girlfriend cheated on him denies the allegation, insists he knows what consent means

A 35-year-old police officer who was accused of allegedly raping and impregnating a young woman after finding out his girlfriend cheated on him, has denied the allegation.

A Bradford Crown Court heard that the sergeant with West Yorkshire Police, had been ‘quite upset’ by his partner’s infidelity. It was further alleged that he had just broken up with his girlfriend on the night he is said to have dragged a 21-year-old woman off a sofa while she was asleep, before sexually touching her as she drifted in and out of consciousness.

The woman had a child as a result of the alleged rape, with DNA tests later showing evidence Lister was the father.

The incident is said to have happened after the police officer went on a night out with a friend in August 2016. Lister’s friend’s fiancée was also out in Halifax with the complainant, a work colleague, and they all met up.

Bradford Crown Court heard the four visited several bars in the town centre and ended up in the Acapulco nightclub. The fiancée told the jury of ten women and two men that she had been out a few times with Lister and his partner Kate, but was not close to either.

She however admitted that she knew in August 2016 that the couple were not on good terms. The lady said;

‘He was quite upset about it. He had not taken it great.’

Though there was an age gap of ten years between Lister and the complainant who had described the alleged attacker as ‘too old for me’, all four got very drunk and caught a taxi back to the engaged couple’s home where the alleged rape took place.

Countering the claim, Lister told jurors at Bradford Crown Court how he had sex with the woman after going out for drinks with friends. He insisted that she consented to it.

“It’s in body language, the moment with someone, the build-up, the conversation.

“I wouldn’t just start to have sex with someone.”

When asked by his counsel Laura Nash whether the woman had asked him to stop, he said “no”.

Ms Nash also asked whether the complainant had indicated she did not want to engage in sexual activity, whether she pushed him away or appeared unwilling to participate. The defendant said “no” to each question.

Lister, who was a constable at the time of the incident in August 2016 but was a sergeant by the time he was arrested and suspended, said everyone on the night out had been drinking and when they arrived at a friend’s house, “everyone was drunk”.

He told the jury: “But no-one was out of it. No-one was falling over. No-one needed to be helped.”

He said the group were laughing and joking before everyone except him and the complainant went upstairs to sleep. Lister described how he and the woman began kissing before he performed oral sex on her on the couch.

He said they then moved on to the floor where they had sex. The defendant said he remembered withdrawing before ejaculating as there was “giggling between us because of the awkwardness of cleaning up”.

Lister was asked about a later Facebook message from the woman saying “did I sleep with you last night?” and why he replied “no”. Responding to this, Lister said he had just split up with his partner who was also a police officer, and wanted to get back with her, but feared her finding out about this one-night stand.

He told the jury;

“It never crossed my mind that I could be the father.”

“I’m the father of that child, I accept that.”

The complainant however denied suggestions by defence counsel, Laura Nash that she had engaged in consensual sexual activity with Lister and that she had lied about not being able to remember having sex with him.

It was also learnt that before deciding to press charges, the woman had told a family member she was not sure she could go to the police as she believed they would ‘just take his side’ and ‘look after their own’.